I’ve been feeling nostalgic lately.  Not exactly homesick.  Mostly nostalgic.  It happens generally when I look at Facebook these days and see all the fall fun.  You know what I’m talking about.  Apple picking.  Hay rides.  Halloween costumes.  Corn mazes.  Gorgeous fall foliage.

Over here?  Not so much.  The weather has turned a little cooler (and rainier).  Many plants are still green and even flowering.  The ones losing their leaves seem to have them turn brown and fall off immediately.  I saw a few Halloween decorations in windows, but not much.  We were in a restaurant that was putting up decorations the day before.  At that point, I thought, why bother?

But I’m seeing that fall in Italy means other things.  It is time for jackets, boots, and scarves.  (Although in Rome, they have honestly moved on to puffer coats already.  Temps are usually in the 60s.)

It is time for vendors roasting chestnuts by the side of the road.

And it is time for fall flavors.  I don’t mean pumpkin spice lattes.  Seasonal favorites like cinghiale (wild boar), truffles, and porcini mushrooms.  We got to experience all of these on our trip to Tuscany.  All in one meal even.

We arrived at our B&B outside Volterra in the late afternoon.  The owners asked if we would be eating at their restaurant in town that night.  We had looked at it in the guidebook, Enoteca Del Duca, but written it off because it was described as a good place for a nice and romantic meal.  And it didn’t open until 7:30.

But, in full view of our toddler and six-month-old, they were asking if we’d be dining there.  I almost followed up and asked, “are you sure it’s ok for kids?”

Since people were rested and restless from the three-hour car ride and we were getting a later start into town, we decided to go for it.  After walking around Volterra in the dark for a bit, we made it to restaurant opening time.  Conveniently, we had the restaurant to ourselves for about 45 minutes.

What followed was one of those magical meals where everyone was chill and enjoyed it.  The kids were not screaming or fighting to get out of chairs.  The adults were not gulping food or exasperated.  We were aided by the bread basket and more liberal use of pacifier than is usually permitted.  (For Henry, they are just for sleeping.  Mac still has full access.) 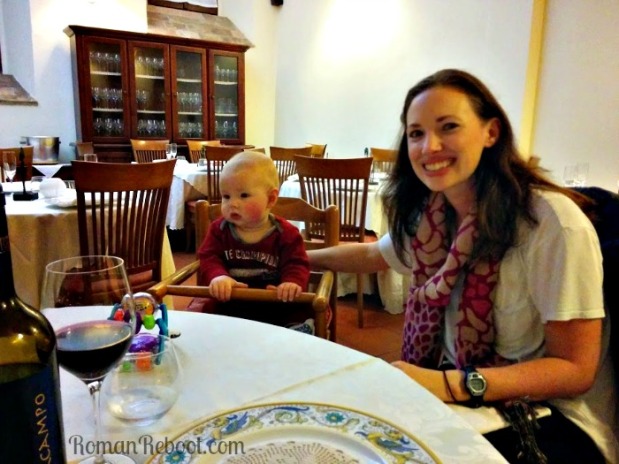 In fact, we enjoyed everything so much that I forgot to take pictures.  But it was all very delicious.  We had a bottle of the owners Marcampo wine, made from 50% Sangiovese and 50% Merlot, which was not quite as full-bodied as we hoped, but had a great mouth feel and paired well with the food.  Oh, the food!  We started with wild board proscuitto with cheese fondue and a souffle with shaved truffles.  I really like boar, but I find it hard to describe.  I wouldn’t call it gamey.  Just like a more robust, extra delicious pig.  Henry hasn’t met a cured meat he doesn’t like, and he polished off the truffled souffle like it was dusted with M&Ms.  A cheap date he is not.

Henry was less interested in the main course, but no complaints from James and me.  I had the pasta with porcini mushrooms.  It was very delicious, with excellent noodles and a light sauce, but I didn’t lose my head over the porcini.  They just tasted like nice-tasting mushrooms to me.  I’m not sure I could have identified them in a mushroom taste test.

James’s, however, was one for the record books.  He got the pappardelle with wild boar.  He allowed me three bites, and I cannot fault him for not offering more.  First, picture the most delicious noodles you can.  Kind of like your mom’s amazing egg noodles, but uniform and somehow staying hot.  And then morsels of stewed boar incorporated throughout.  Boar that is tender, but has bites with a hint of crispy burnt end kind of deliciousness.  I had a pretty decent boar pappardelle later in the trip, but this dish will be the one against all others are measured.

At that point, the natives were restless, so we skipped dessert and coffee.  Didn’t want to push our luck.  We had other pleasant dining experiences and tasty food on our trip, but nothing where everything came together like that first night.