I am fascinated by small space designs.  I don’t know that I want to live in a microhouse, but I love the idea of having a smaller space that is designed in the best possible way so that it feels bigger than it really is.

We stayed at the Hotel Blauer Bock in Munich.  Blauer Bock was in a terrific location, had a very friendly staff, and the room price included breakfast and internet.  It was definitely a bit of a splurge, but we were stymied on where else to get a room with two cribs.  We received polite responses to inquiries that stated the hotel did have two cribs, but we would not be able to fit two of them in a room.  We almost booked adjoining rooms at the Pension am Jakobsplatz, but we were cautioned about ongoing construction noise there and thought that might not be ideal for nap time.

Our room had some thoughtful design touches.  I was impressed with the cutouts above the bathroom that added light to a darker area.  It was also nice to have a coat rack right by the front door. 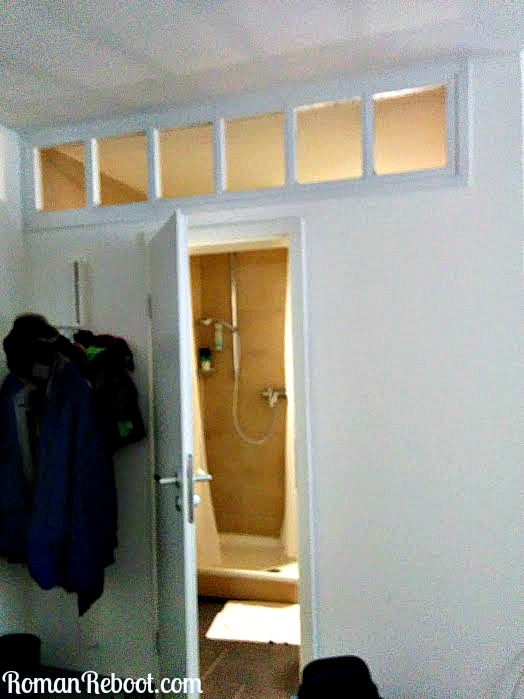 The nightstand with reading light was also nice.  After spending many years sleeping with my kindle under my pillow or on the floor, I value a good nightstand.  I’m not sure why I didn’t take the plunge at our old house and fasten something to the wall, as they did here.  I guess it just feels so permanent.  Hope you like where the bed is because your nightstand ain’t moving!  I operate under the (misguided) belief that there is a perfect furniture arrangement that can be found if you just keep trying.  What if I nightstood before it was achieved??  (I know, I know, it could move.  But if you are too lazy to attach a nightstand in the first place, you are probably too lazy to move it.) 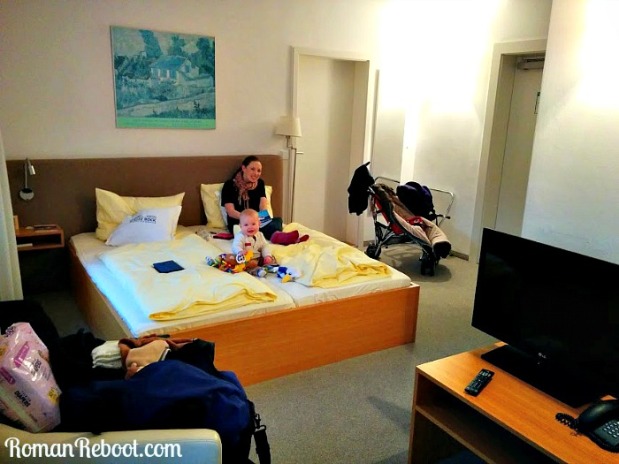 The hotel room also had some great features for a stay with kids.  After fearing that we would be sandwiched with cribs touching the bed, I was pleasantly surprised to find that we had a sitting room separated by a door that was a perfect spot for the kids.  Well, it was perfect for the first three nights.  After that Mac got unexplainedly ragey when you tried to put him down.  Then, once you finally rocked him to sleep and set him down, Henry screamed, “MACKLES” from across the room, starting the screaming all over again.  At this point, Mac was removed and placed in the corner of the main room. 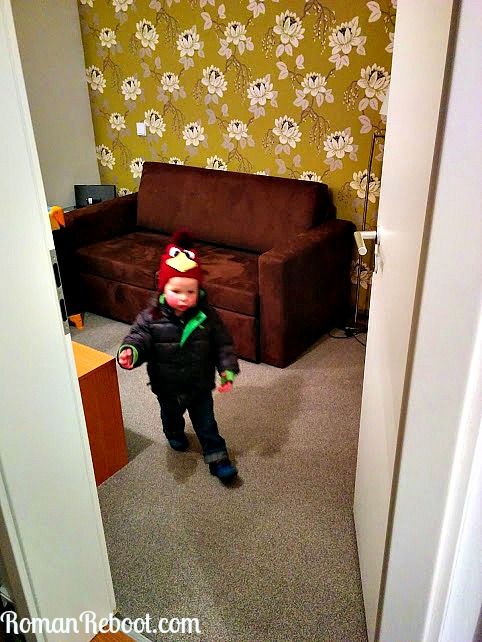 Unfortunately, the bathroom was not ideal for two littles.  No tub.  We had a corner shower with two curtains.  Why do people do this?  Maybe it looks nicer to have curtains instead of a door?  Maybe it is just easier to clean?  But it sure was a pain for showering.  The space shrunk by half as the ghost curtains horned in on you once you started the water.  Let’s just say the kids did get cleaned, but not as often as at home.

Henry was thrilled to have two TVs to play with.  He either didn’t notice or didn’t care that all programming was in German.

Anways, I’ll file the good design ideas away for now.  I have this vision that maybe someday we’ll get to design a space of our own and use all these bits of inspiration to make an amazing space.  The YoungHouseLove-rs always advocated living in a space for awhile before making any major changes so that you really know what you want.  I like to think that we’ll have some thoughts from our previous locales if we ever get to design a space of our own.

Any design features you are itching to change on your current abode?  Any that you love?  Have your dream space all planned out?