I’m not big into Valentine’s as an adult.  Remember how fun it was in elementary school?  First, I got to pore over the wall of Valentine’s at the store.  (No handmade craftiness for us.)  Would I get Strawberry Shortcake or the Smurfs?  What would my choice say about me??

Then, I would divide up the eight cheesy cards in the pack and completely over-analyze which message should go to each person.  Would the “you’re the sweetest” or the “be my valentine home run” card better convey my affection to my crush?  And then what did his card to me mean?  Please tell me I’m not the only person that did this.  Looking back, I’m sure guys just ripped through the bag and did some nuanced calculation like “chocolate? No?  Next card.”  Sometimes it is hard to be a girl.

Now I fall into the “Valentine’s Day is a forced display of affection that should be shown all year round and not because Hallmark tells you to” camp.  But I do like chocolate.  I’ve told James I thought it would be super romantical if he would get me an enormous box of chocolate–even better if marked down the day after–that is so big that I could take a bite and then throw away any pieces I didn’t like.  “Why wouldn’t you just look at the chocolate guide?” says you.  Me:  What sort of monster are you?  I bet you read the last page of novels first.  Did you listen to nothing Forrest said?  You don’t get to know what you’re going to get!!!  (James has delivered on the giant chocolate box on multiple occasions.)

Anywho, not necessarily for Valentine’s but happy coincidence, I found myself on a voyage to chocolate.  A friend mentioned a “chocolate factory” down the tram line from us.  I thought this would be an excellent outing with my mom.

We had been warned that Said is down an alley.  There is a sign on the street, but I doubt I would have found this if I hadn’t been looking for it.  Willy Wonka, I am not. 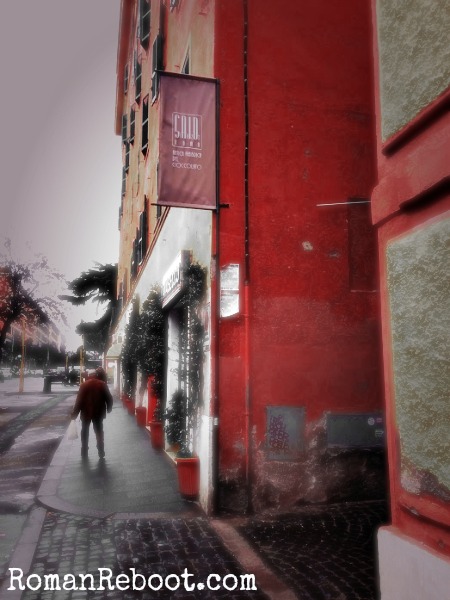 We rolled in.  (Literally, because of the stroller.  Get it?)  Chocolate abounded.  Cases of chocolate.  Chocolate bars.  Chocolate spoons.  Chocolate covered coffee beans.  I had to tell Henry not to touch the glass about 75 times.  That kid is more into chocolate these days than Cathy from the comic strip.

Up front, Said has the chocolate cases and some cafe seating.  The restaurant doesn’t open until 4:00 pm and you need reservations, but they were nice enough to let us poke around in back.  It has a reclaimed wood Pottery Barn kind of feel.  Very open and airy, but also cozy.  It would be a great spot for a super romantic styles date.  Apparently, for the food, they put that chocolate on everything.

Mac napped, until he woke up and still didn’t get to enjoy any chocolate

Our mission was the hot chocolate.  (The cafe also featured coffee with chocolate in various forms.)

Deciding to hedge against toddler rage, we ordered three cups.  Hot chocolate with chili, with cinnamon, and just milk chocolate.  All with homemade whipped cream, natch. 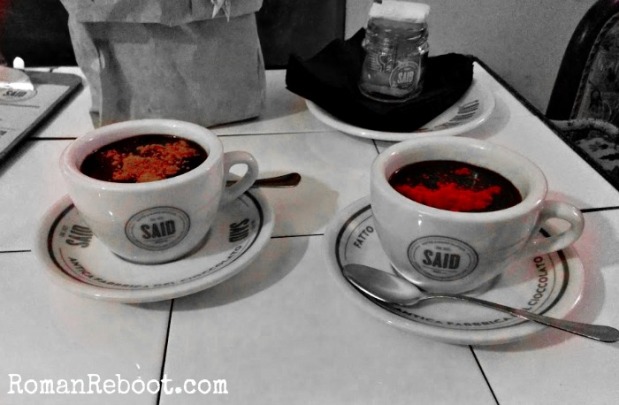 Decadent does not even begin to describe this stuff.  It is sort of like trying to drink pudding.  Or chocolate mousse.  Henry ate it with a spoon.  Adding the whipped cream made it a little more beverage like.  It was truly ridiculous.  My mom even uttered the unthinkable phrase, “I don’t think I can do any more chocolate” at one point.  It was that much chocolate. 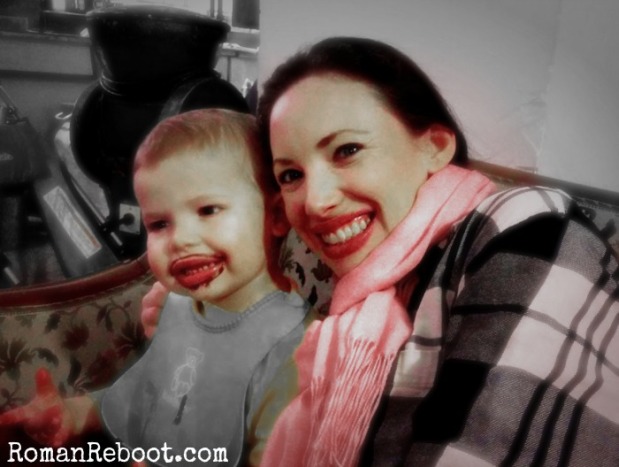 All in all, it was an excellent outing.  Trams showed up right as we rolled up.  We did not suffer any meltdowns whatsoever even after my mom DARED to utter “well, things are going good so far” midway through the outing.  Henry may have touched a cigarette butt, but this is why we have soap.  I want more outings like this.  Rasslin’ two kids onto public transit by myself can be crazy tough.  But I’m vowing to do more.  Particularly if there is a sweet reward at the end.  And you better believe, I’ll be back here for a date night soon.  Just not for Valentine’s Day.

Big V-Day plans?  Are you pro or con?  At least, pro chocolate though, right?