So James let Henry have a turn with the camera the other day.  The nice camera.  Now the kid is obsessed with “hitting the button.”  He tries to look through the viewfinder, but I’m not sure what he can actually see.  It’s pretty cute.  It would be even better if I wasn’t worried about him breaking the nice camera.

Yesterday he was insistent on more camera time.  After I had about 50 shots of the same thing, I decided to put him to work on a house tour we could share.  (A “keeping it real” tour though.  Nothing was cleaned so you would have the authentic experience.)  So without further adieu, the unedited work of my two year old:

This is our view when you walk in the front door.  The doors straight ahead lead to the balcony shown here.  Once the rest of our stuff arrives (our place is partially furnished), we’ll have a piece of furniture to collect purses, bags, and change.  For now all of that is going to the two desks on the left that I hope will be an office nook eventually.  I haven’t wanted to set it up yet because workers are coming Monday to bash in the wall in an attempt to fix water damage in the unit below.  The joys of apartment living! 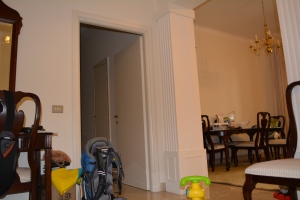 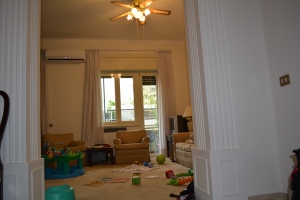 On the other side of the rando column, we have the connected living and dining room.  We do most of our eating in the kitchen so the dining room table is pushed to the wall.  I have done much furniture rearranging in this area.  Toddler-height photos may not do it justice, but note that there are really tall ceilings here.  Like 13 feet.  You know, in case we ever want that indoor trampoline.  (No one tell Henry about trampolines.) 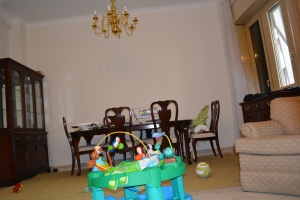 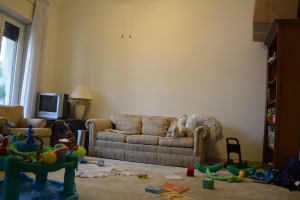 Then we have the hallway.  This slick marble floor is ideal for Thomas the Train riding, car zooming, and dangerous falls.  Not shown, but we have two closets off this hall.  One is sort of a linen closet.  The other used to be the laundry room, but is now a walk-in storage area.  They turned the third bathroom into the laundry room.  James was bummed.  I say yay for one less toilet to worry about needing cleaning!  There are also two built-in wardrobes. 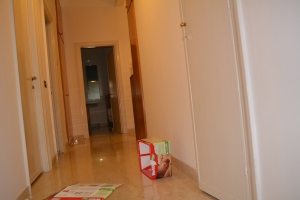 Here is Bathroom #1.  First door on the left.  The shower is oh, so European.  And currently housing a vacuum cleaner.  Because why not. 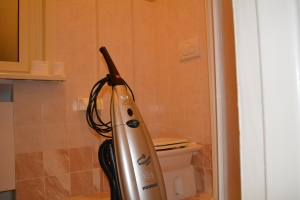 Down the hall, we have the kitchen wing.  It consists of random entryway, laundry room (which has a shower because of former bathroom fame), and then the fairly spacious kitchen. 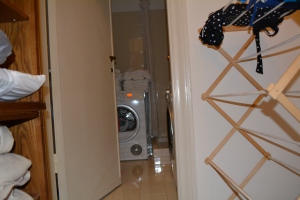 Here are two shots of the kitchen.  Besides child containment, it is nice to be able to close it off because of the heat.  We have an overhead fan, but that makes the burners flicker when you are actively cooking.  And we have a dishwasher!  This was an unexpected bonus, based on previous pics.  No garbage disposal and the shallowness of the sink generally soaks you when washing dishes, but I’d say a pretty decent kitchen. 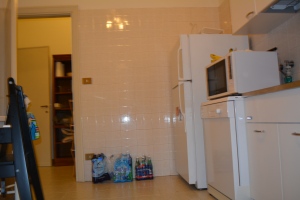 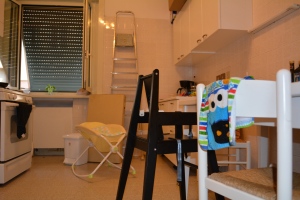 Here’s Henry’s room.  (Mac’s room not pictured because he was sleeping at the time.)  This is the smallest bedroom.  I’m hoping that this may be the guest room if the boys are ever able to share.  Although guests–consider yourselves warned–this room does not have an overhead fan.  We’re currently borrowing a neighbor’s fan while we work on a solution. [UPDATE: ceiling fan installed!] 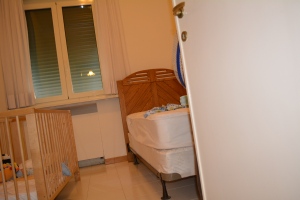 Here’s my room.  I know you can’t see much other than an unmade queen bed, but it has room for dressers and his/hers nightstands complete with lamps.  I gotta say, these feel like a luxury! 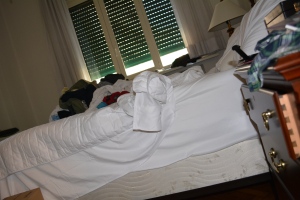 And here’s our budding photographer in the most used bathroom.  On the left you can see the tub which has this weird accordion thing that you have to very carefully position to block water when you are showering.  But the bathroom has good storage, good water pressure, and very hot water (most of the time) so not complaining. 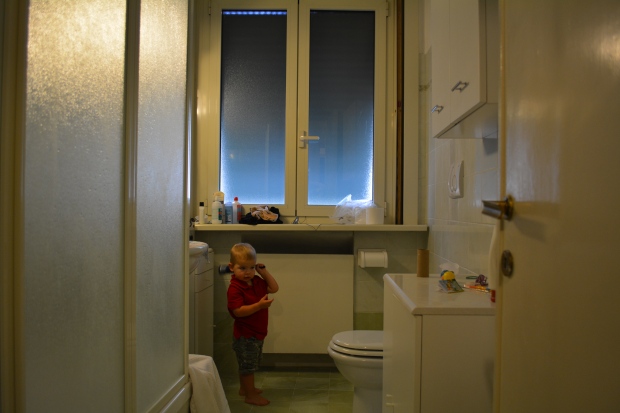 I’m sure I’ll talk more on this later, but I really like it.  It felt like there was too much furniture before, but now things are redistributed, and it just feels like a lot of storage.  Which is great because I’m not sure where everything will go when the rest of our stuff shows up.

Single floor living is also awesome for laundry.  All three bedrooms are within 15 feet of the laundry room.  No more carting loads up and down two flights of stairs.  Given how much laundry there is, I cannot emphasize enough how fantastic this is.

I really like most of the use of space.  I’d call it open living with optional partitions.  The main area is nice and open, but I can close it off.  As I mentioned, I can close off the kitchen area.  Doors don’t mean much to Henry anymore, but I like having the option.  I might mind the placement of the kitchen if it wasn’t for the table back there.  But now it is really easy to cook and talk to Henry at the table.

And that’s our home. I’ll update again when the rest of our stuff arrives.  Henry was already asking to use the camera again . . .

2 thoughts on “House tour, courtesy of a toddler”