Sadly, I cannot say the same for beer.  As I mentioned here, I’ve been disappointed by the beer situation so far.  Granted, we haven’t tried very much.  This is mostly because the beer at the grocery store looks like a light lager fest.  And I’m not hating on light lagers, but there is a time and place.  James finally found a German Helles and it was an almost spiritual moment.

To address this situation, on a recent date night we headed to Open Baladin.  It is the Roman outpost of the Italian brewery, Baladin.  Open Baladin opened in 2009, but Baladin has been brewing since 1996.  We knew going in that they have more than 40 draft beers and supposedly decent burgers.

The place is close to Largo di Torre Argentina (which totally did not have any cats when we walked by.  WHAT??)  It was tucked in off a side street where I may have asked James if he was taking me somewhere to murder me.  But we found it.  We walked in.  We saw this.  Angels sang.  It was glorious. 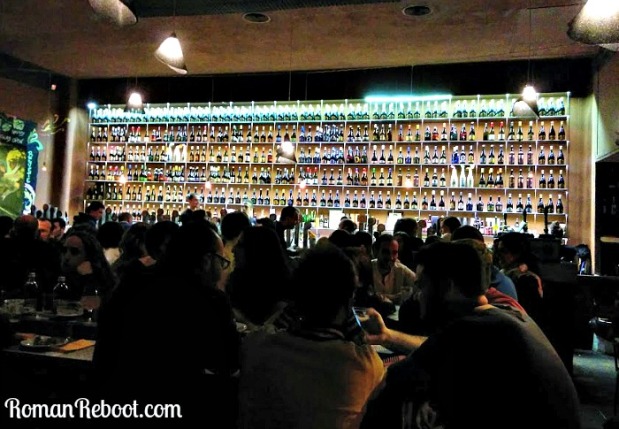 The extra cool thing about Baladin is that they serve their beers alongside other Italian microbrews.  No tasters though.  All draft beers are served in 33 cl sizes and cost 5 euro.

The place was definitely hopping, but we didn’t have trouble getting a table.  In what seems to be a trend, we were sat at a table with a “reserved” sign even though we did not have a reservation.  (James tried by phone earlier, but it seems they don’t do reservations for two people.  Although the first thing they asked us coming in was whether we had a reservation. Go figure.) 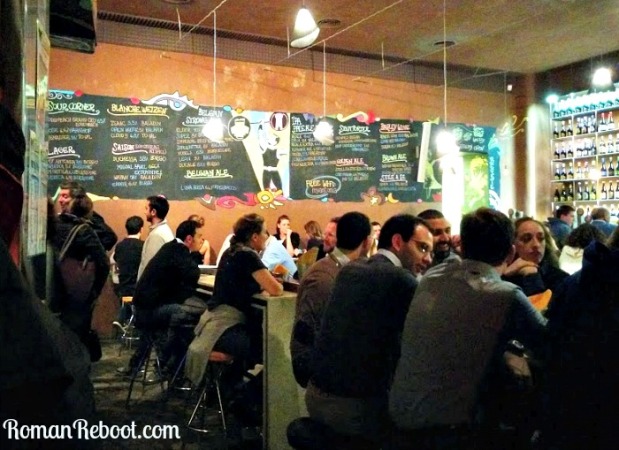 Here, we had three beers each and burgers.  James definitely “won” this restaurant.  Luckily we both won on these homemade garlic and pecorino chips. 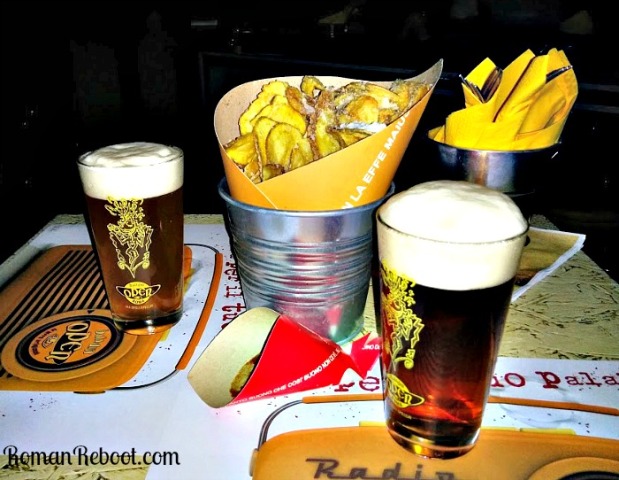 The ketchup was basically tomato paste.

I had the “singing in the rain” burger which sounded yummy, but I thought it was too red peppery.  James had something with cheese, eggplant, and other stuff which was very delicious.  The burgers were not quite like home, but definitely the best I’ve had around here.  Which isn’t saying much; I’m not really out sampling many burgers.  (Two months in and no trips to McDonald’s yet!)

And on to the beers.  I was disappointed to learn that they were out of my first choice, Follower IPA from Vento Forte.  I was out for hops.  ALL THE HOPS.  (Luppoli = hops.  Luppolata = hopped.)  I substituted with a TSO from Casa di Cura.  It was ok.  Certainly a drinkable beer, but nowhere near the punch-you-in-the-face hops I was hoping for.  James had a Gerica, a lager from Birrone.  It was described in the menu as when the Germans met the Americans.  It was excellent.  Some German sensibilities with American hops.  This was probably my favorite beer of the night.  I would have gotten more of it, but there was no time.  So many beers to try!

Up next, I got one of Baladin’s Opens.  It seemed appropriate given the location.  It was described as a pale ale, but it just tasted a bit off.  James got an espresso-flavored stout.  It was at the suggestion of our waitress, and I was never certain on the name.  It was pretty good.  Very drinkable.  Good for the cooler weather.

To finish, I joked with James that I would get him one of the Belgian beers.  “Haha, like maybe I’ll get you a ‘Triplica Special Edition,’  (from Opperbacco) wait that actually sounds good, I’m getting it.”  It came in a fancy Belgian glass.  I don’t know if I would get it again, but it had nice hops and nice flavor.  It was good for me to end the night with.  James got Baladin’s Nina on cask.  It was smooth.  Kind of creamy.  It didn’t taste super ESB-y as described, but I recall that it was decent.  This round was probably a draw.  I think we were both happier with what we got.

Even with my “loss,” it was a great night.  Considering all of the people there, service was shockingly good.  Like beer came faster than if I had been sitting at the bar and watching the bartender pour it.  Many other restaurants are on our list, but I’m sure we’ll be back.  The siren song of the hops is a strong one.