Instead of rambling about your vocabulary (immense) and your size (also immense), let me tell you a story about a recent trip that sums up the essence di Henry, if you will.

On a sunny, long weekend in June, we did an overnight trip to Spoleto, Cortona, the Perugina chocolate factory, and Assisi.  There were plenty of quintessential Henry moments throughout, but I’d like to talk about our time in Assisi. 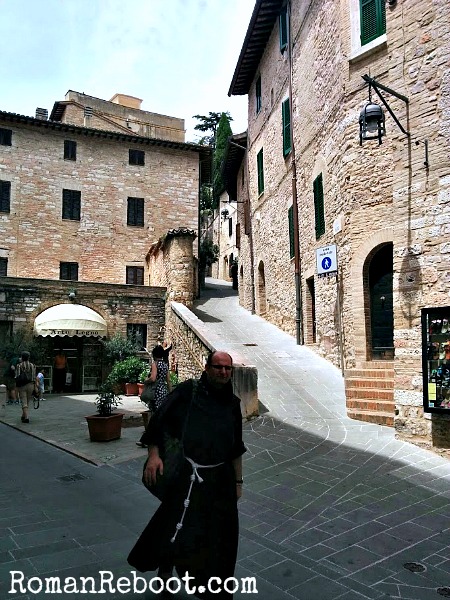 We made it into town, and toured the incredible Basilica.  Your behavior was fairly good, all things considered.  (Because this was last day of the trip, I think we had already relented on chupito crackdown.)  We saw the tomb of St. Francis, which particularly fascinated you.  We didn’t see any skulls, but these also fascinate you these days.  You can’t seem to understand how skulls are inside our heads, but that they are sometimes outside of our heads like on Jolly Roger flags and in the Capuchin Crypt.  How do they get out,  you want to know.  Per advice, I’m trying to talk about death in a toddler accessible way, but I could be mucking this one up for which I apologize in advance. 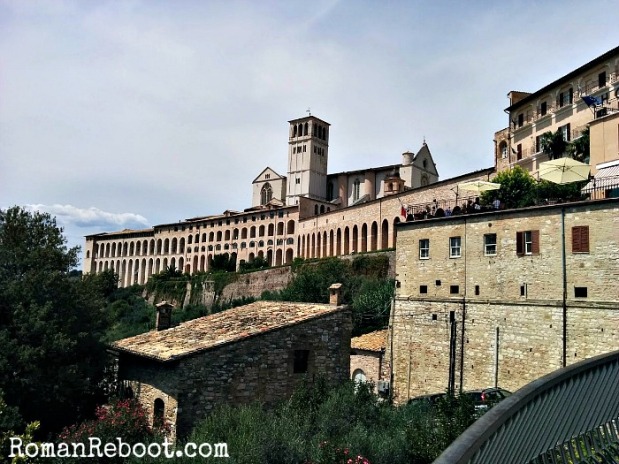 Anyways, we hit the church and then had a nice, light lunch at the Ristorante Bar San Francesco.  Because it was a million and two degrees, give or take, I enjoyed an Italian beer which at the time was one of the best beers I’ve ever had in the history of ever.  Your grandfather told me once that one of the only times he craved beer would be after cutting the grass.  Yes, that, EXACTLY.  We have reached the weather for which Italian beer is perfect.

So we leave the church, and even though it is seriously encroaching on nap time, we decide to explore a little.  I know, I know, it was pushing the envelope of good child behavior.  But I hate to leave a city completely untouched.  We do a lot of sightseeing compromising with you and your brother.  We pressed on.

So we’re walking around town.  Yes, walking.  We let you do your new-to-you balance bike in Spoleto and Cortona, but we opted to leave it in the car for this adventure.  You are kind of beast on this thing.  After a week, it seemed like you could push this sucker along, picking your feet up for disturbingly long amounts of time.  I guess no training wheels for you, kiddo.  You’ve ridden it over a mile at a time, both to Villa Borghese and Villa Glori.  I think it could revolutionize weekday adventures for us until you crap out and refuse to ride another push.  I have been pleasantly surprised that you are not refusing to wear your helmet.  You’ve taken head protection very seriously.  Hmm, this could have been a part of your obsession with skulls . . . 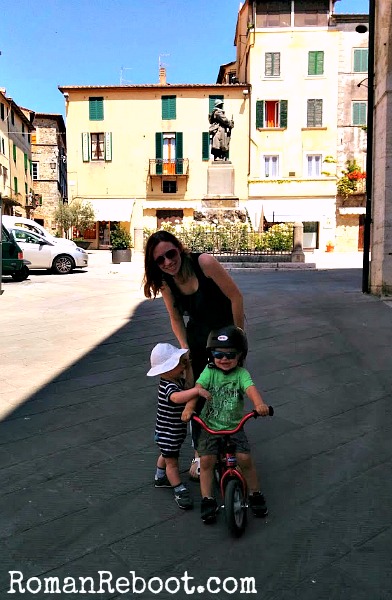 Anywhoo, so we’re walking.  But let me back up first.  For this trip, we stayed at Agriturismo Marilena la Casella and enjoyed the half board there.  (You get breakfast + lunch or dinner.)  We were the only ones eating so we had a dining room all to ourselves to terrorize.  (Let’s just say we’ve learned our lesson after your Munich “incident.”)

The hosts kept a TV on during the meals.  Normally, I’m not a fan, but when it is already 1930 and you are trying to make it through a multi-course meal, I’ll take all the help I can get.

The TV was tuned to station with music videos that also seems to be a radio station.  Very Normal People is the name and catchphrase which is broadcasted on the reg.  I have searched the internets for a clip of the catchy “Very Normal People!  Very Normal People” clip, but I can’t seem to find it.  Trust.  It drills deep inside your head and won’t let go.

OK, back to Assisi.  We leave lunch.  It is hot.  We’re tired.  I had a beer with lunch.  We are all a little punchy.  And for some reason, we can’t stop singing the “Very Normal People” theme.  By “we,” I, of course, mean you and I.  Mac is starting to talk, but that is a bit outside of his capability right now.  And your Dad is just shaking his head at us, per uzh.  (Aside:  I’m trying to say per usually, but man that is hard to abbrev.  Urban Dictionary has my back on this spelling at least.) 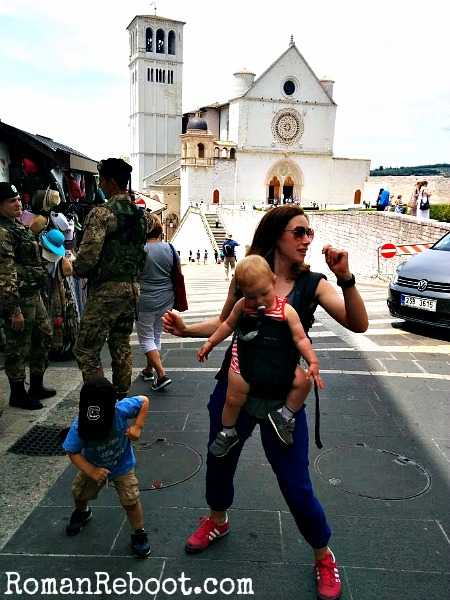 Very Normal People quickly transforms into Very Normal _____.  Very Normal Moto!  Very Normal Table!  Very Normal Cane (dog)!  We are literally dancing down the streets of Assisi “very normaling” everything.  You are possibly throwing in some toddler pelvic thrusting.  I’d definitely consider it one of our “Yes, we are having more fun than you” moments.

We made it to the main piazza and found some gelato.  (Some very normal gelato, natch.)  You pass out on the walk back to the car.  No worries, I think, you are beyond tired and you’ll sleep again on the way home.  NOPE.  You refused to sleep the whole two hours back.  So this is no nap + limited naps on previous days + two days of staying up late for our fancy half board dinners.  In short, it was a recipe for disaster. 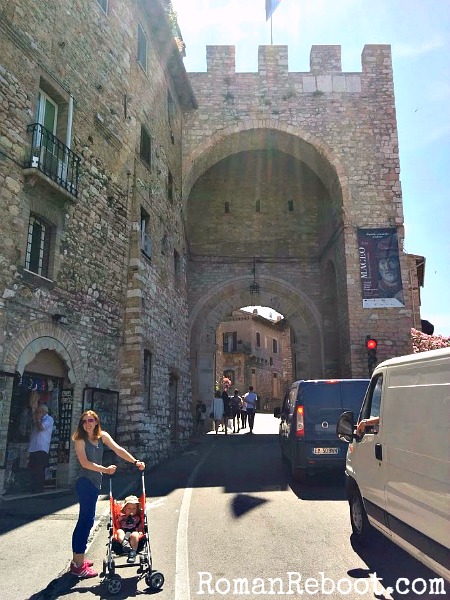 When we arrived home, we went from the highest of highs to the lowest of lows.  You were, please pardon my French, a Class A Doodyhead.  And we could all tell it was because you were so beyond tired you couldn’t even adhere to the rudimentary societal constraints that have been drilled into your thick toddler skull.   But it was still really annoying, and I was Class A grateful when bedtime rolled around.

You do have pretty high sleep needs.  Even more so than your brother.  Woe to us if you nap less than two hours.  I thought you might be thinking of dropping the nap because you’d had a few days where you were just not tired at 2000 and I let you read for a bit.  But then you run around in the hot sun and play in the awesome kiddie pool at asilo and you are pooped by noon.  We’ll figure it out.  (I’m pro nap, BTW.)

So that sort of sums up our life together.  The highest of highs interspersed with crushing lows.  I suppose you come by it honestly.  (Besides that whole being a two year old thing.)  You may look just like your dad, but you have a large dose of Mom’s personality.  We can see it in the song lyrics you make up.  Or your sweet dance moves.  Or your inability to do things in moderation.  And I’m OK with that.

3 thoughts on “Very Normal Henry (with a side of Assisi)”