We took advantage of a recent sunny Saturday to visit Civita di Bagnoregio (which I will now refer to as CdB for the remainder of the post).  CdB was a little over an hour from Rome.  You have to drive straight through the town of Bagnoregio to get there.

I know.  It’s pretty ridiculous, right?  CdB used to be bigger, but pieces have been falling off the cliffs for centuries.  It is known as il paese che muore or “the town that is dying.”  Now you can only reach the town by bridge.  This means by foot, motorcycle, or Ape are your only choices up.  There is ramp all the way so you could take a stroller or wheelchair if you wanted.  I did not, but we saw people that did.  I can report that an ambitious toddler can walk or run almost all the way up on his own. 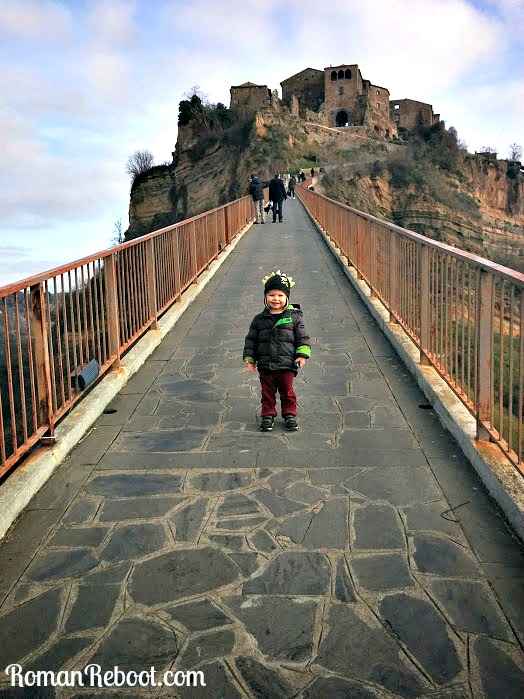 Before we set off up the bridge, we did a little parking shuffle.  The first pay lot we hit is close to Caffe Belvedere.  (Belvedere seemed to have some nice outdoor seating with a tiny playground nearby.)  But we weren’t there for the food.  We were there for this:

And then we realized that we would have to hike down before hiking up again.  We saw some perilous looking stairs.  This was not what the guidebook told us.  James noticed another lot down under the bridge.  We had been directed into the upper lot, but maybe we could try again?  At least we got some great views.

I think they are trying to limit the lower lot to people with mobility issues or bambini, but you could probably just do it.  For this lot, take a right immediately before the parking lot.  It turns out, most people in the upper lot walk on the road to access the city.  I’m not sure if people actually use the stairs.

We parked again (pay lot) and bought tickets for CdB.  Tickets were 1.50 euro for adults. 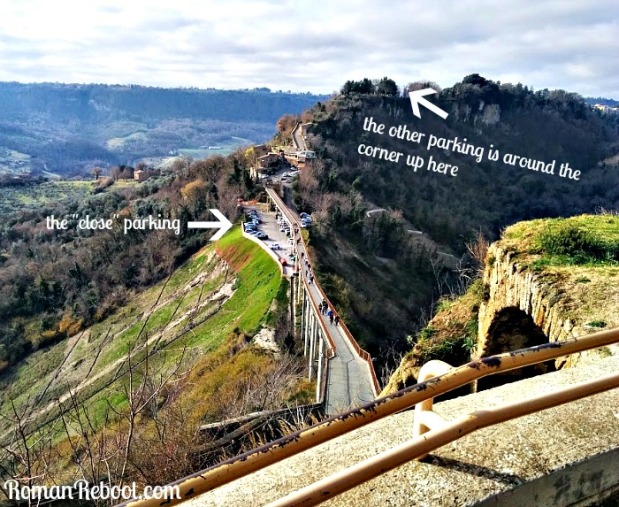 The walk up wasn’t too bad, even while wearing a baby.  The town itself was incredible to see.  Even though it is probably about as old as Volterra and San Gimignano, it felt older.  Stately, but a little crumbly.  The town was also full of cats, an unexpected bonus for Henry. 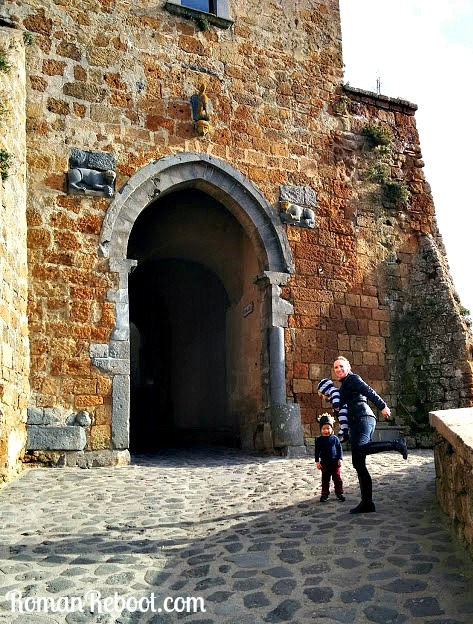 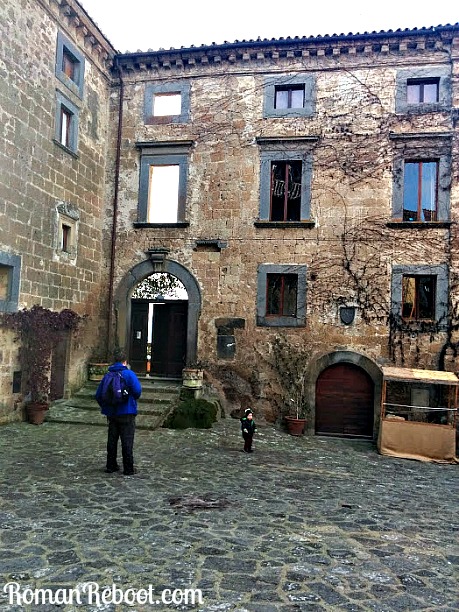 Note the daylight behind those windows. A palace used to be there until it fell off in an earthquake. 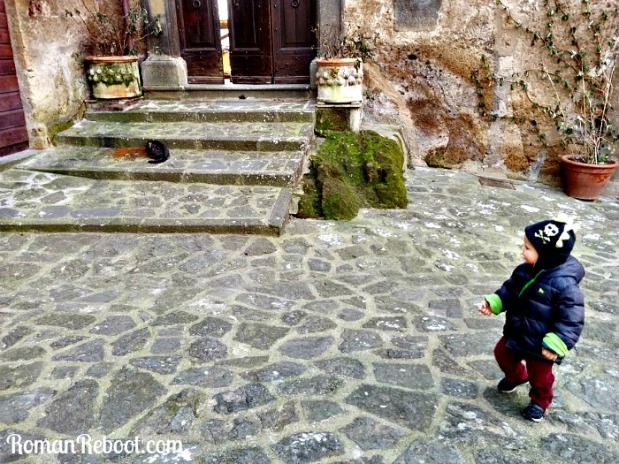 This is the main piazza with the church.  The town has a live Nativity scene during the holidays, but it was not happening when we were there.  We did see a large rabbit and chickens in a cage that may or may not have been a part of the scene. 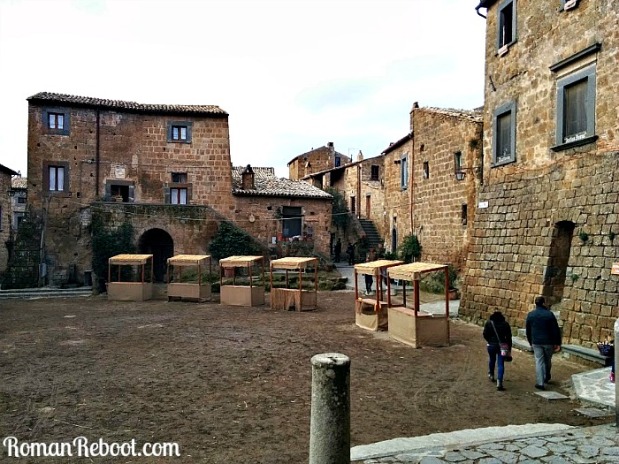 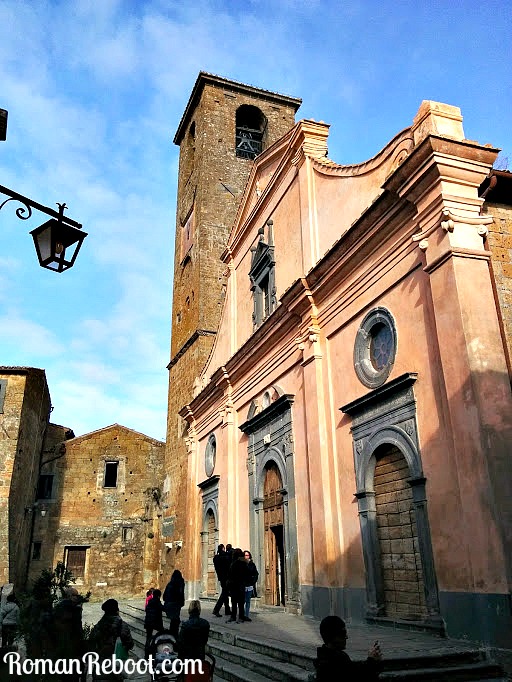 We ate at L’Antico Frantoio Bruschetteria, famous for its 1500 year old olive press, which we sat right beside.  The restaurant seemed practically hewn out of the rock.  Seriously, it felt like you were entering a cave.  All in all, it was a decent meal.  We had a prosciutto plate and bruschetta.  It was just cold.  So very cold.  Not the food, the restaurant. The unremarkable quarter liter of red wine we got was colder than most white wines you find.  I only realized on the way out that they were cooking everything on a very small open fire at the front. 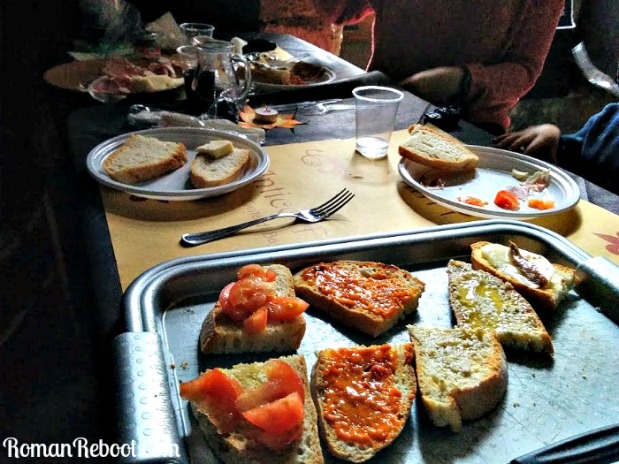 When we emerged, the sky was grayer and moodier.  We poked around a little more and then started the trek back to the car.  We blew up nap time, which the kids made us pay for over the next few days.  But I would definitely call this a town that was worth it. 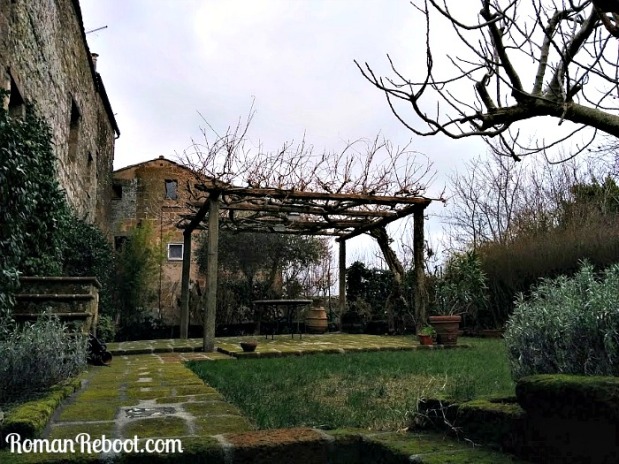 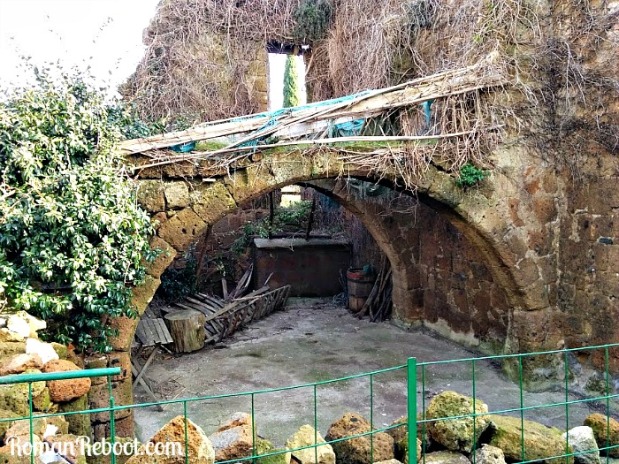 4 thoughts on “The city that time forgot”