Hmm, what I’m trying to say is that–at least for sightseeing–we try to see interesting things and find something the kids are interested in there.  We went to Villa Torlonia, Henry found a palm frond.  We went to the Vatican, Henry chased a pigeon.  Things like that.

But the weather has been colder and wetter.  Days have been darker.  We have dipped our toe into some kid-focused entertainment.

I wouldn’t recommend hitting these sights if you are just in Rome for a few days.  But if you are in Rome for an extended period of time with kids, they may be worth investigating.

Explora is a children’s museum.  It is not too far from Piazza del Popolo and is right off the #19 tram line.  I took the kids on a weekday morning.

It was a pricier outing.  Everyone over three costs 8 euro; toddlers 12 – 36 months are 5 euro.  They do offer an annual pass.  If we lived closer to the museum, I might consider it.

I thought this would be a great rainy day activity, but you’d still get a little wet.  There is a parking lot, but it is a bit of a hike to the entrance.  And then the ticket office is in a separate building from the museum so you are exposed to the elements again to go between.  Not a huge deal, but I figure good to know.

Explora was very interesting, and I think it would be even more so if your kid is older than age two.  A lot of the stuff went over Henry’s head.  (Literally and figuratively.)  I realized how toddler-centric my world view has become when I couldn’t help but noting the hard concrete floors throughout the museum.

The museum focuses on role playing exhibits.  For example, there was a car that you could fill up with gas.  There was a garden where you could harvest veggies.  (If I were craftier, I’d work on making something like this.)  There was a supermarket with a checkout counter.  There was a kitchen with play food.  You get the drift.

There was also a pretty sweet water area.  You moved levers and pumps that manipulated things in the exhibit.  Henry didn’t really get the cause and effect bit of that, but he did like splashing around. 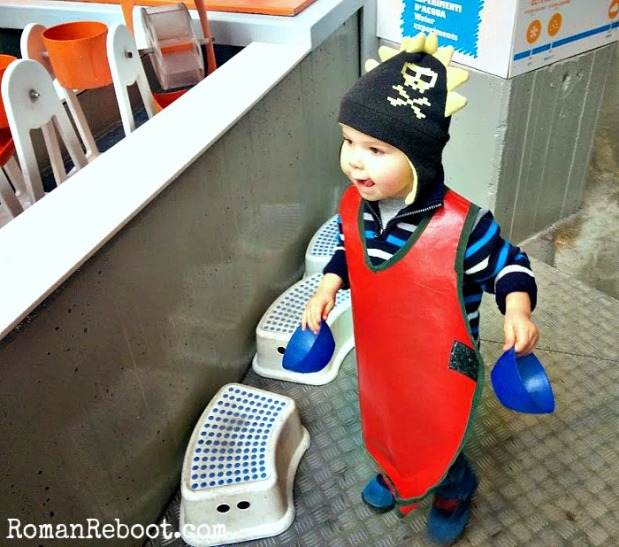 On the second floor, things seemed more exhibit-y and less hands on.  I only took Henry up there to try to distract him from throwing food at other peoples’ heads.  I don’t care if he throws the fake food.  Just not at heads.

There is also a separate area for the three and under crowd.  Still concrete floors, but some mats and other squashy things to play with.  Like this sweet instrument wall.

There were a few field trip groups making their way through the museum.  It looked like fun.  If you have an elementary school age kid, I might consider Explora.  Not on a 3-day visit to Rome.  But maybe on a month long visit.

On two rainy Saturday mornings, we headed over to Bimbilandia.  A quick note on the name, which cracks me up.  In Italian, a baby, or really baby + toddler, is a bambino.  (Bambina if feminine.)  Bambino is abbreviated to “bimbo.”  On the backs of cars you see “Bimbo a bordo” (baby on board) stickers.  It cracks me up every time.  And then if you have more than one bimbo, it is bimbi.  So I’m probably still messing up the translation somehow, but I just think, oh, my, we’re going to the land of the babies!!

Bimbilandia is a bit like Roman Chuck E. Cheese’s.  If Chuck E. Cheese also had an ice skating rink, coffee shop, and martial arts studio glommed on to it.  No, really, the place looks like your Southern relatives just started putting up various outbuildings and squashed them together.  (I can say that because I’m from South Carolina.)  The result is a structure does have heat piping in, but is still drafty.  The roof also leaks in certain places.  Less than ideal in a place you are running around in without any shoes.

Mac is skeptical of the ball pit

Henry’s eyes lit up when we walked into this place.  It was all I could do to get his shoes off him before he bolted.  Unlike some things we do, there was zero new place hesitation.  He was like, “Oh, I’m ready to take this on.  I got this one.” 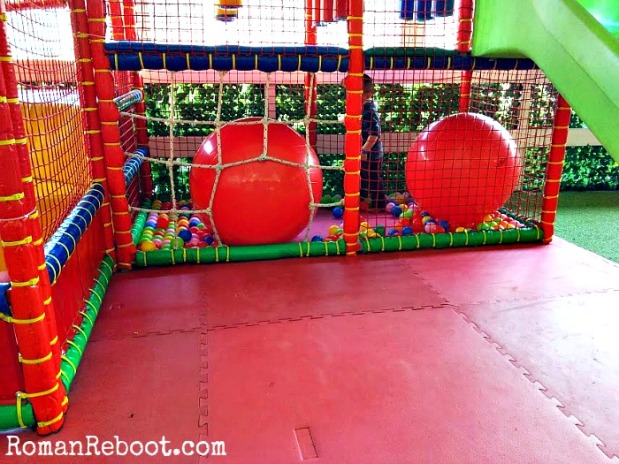 They do birthday parties here as well.  You can see little “houses” with fenced in yards for each party.  It looked like a neat setup.

We’ve only gone right when they open.  It starts to fill up after the first hour and gets to be a bit much for the little kids.  I could see this being even more attractive when the kids are a little older.  You could sit calmly by the side with a cappuccino while watching your kids pelt each other with foam objects. 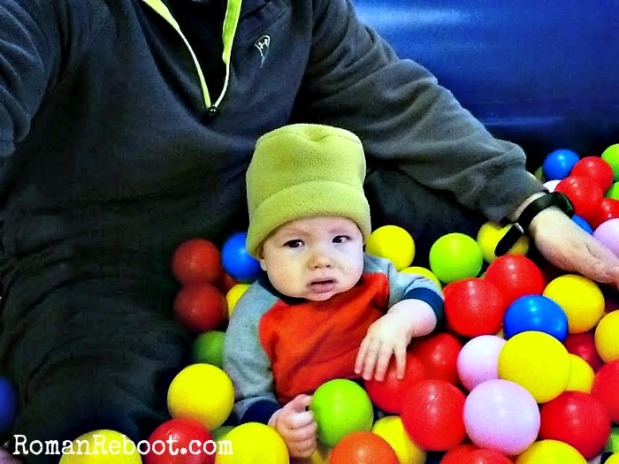 So there you have it.  I don’t think either of these will be in our regular rotation, but I’m glad to have the option!