What makes traveling with littles easier?  Is it wide, smooth sidewalks that can accommodate strollers?  Is it speedy and prompt public transportation?  Is it having a changing table on every corner?

All of these things wouldn’t hurt.

But what is something you do every day?  Probably 3x/day.  Possibly more.  No, I’m not back on the changing tables.

I’m talking about food.  Probably in some restaurants if you are traveling.

And for this reason–not because of the unbroken sidewalks or the speedy public transit–I’m calling Germany more kid friendly for travel than Italy.  Yes, both Italy and Germany have restaurants.  But in Germany they are open.

See, Italy is on a  more relaxed, nap schedule.  Most restaurants don’t open until 12:00 or 12:30.  They shut down mid-afternoon and reopen for dinner at 7:00 or 7:30.  (I suspect you may have similar issues in countries that eat late such as Spain and France.)  This means that you can have a decent experience dining later, but it can be hard to sustain for several meals and days on end.  Even with liberal snack and pacifier usage, littles and restaurants are just tough sometimes.

On our trip to Munich, restaurants opened in the morning and stayed open all day long.  It was quite novel.  This meant we could beat the lunch rush at 11:30 if we wanted.  We could go to dinner and have our food by 6:00.  (We should have made more dinner reservations; things filled up.  But it worked out.)  I’m not going to lie, it was pretty convenient. 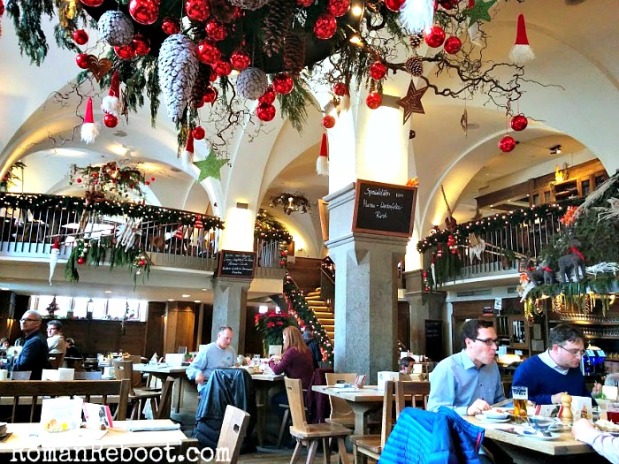 Decked out for the holidays at Der Pschorr

Our servers were efficient and speedy.  I’ve generally had great service in Italy, but the Germans were just humming along.  The restaurants were bustling, but I didn’t feel rushed.  Granted, it is hard to make someone feel rushed who is inhaling their food while trying to cut and distribute food to two kids.  The German beer halls we visited fit our current pace of life. 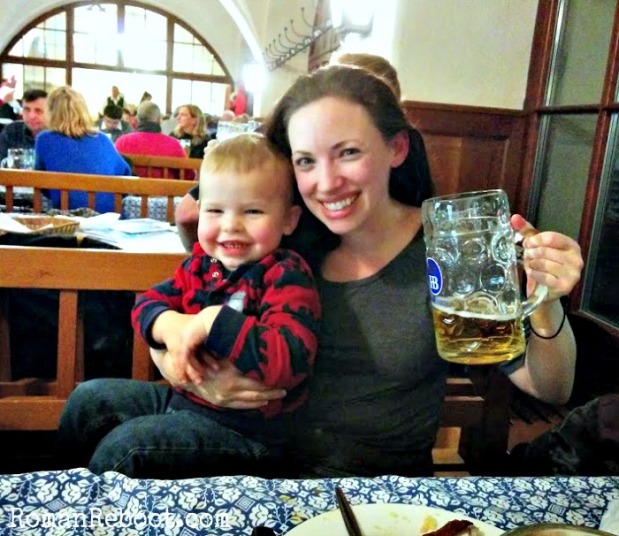 They would not have been ideal for a romantic, lingering dinner.  I adore going out on date night and savoring multiple courses, hands held on the table in between.  Italy is perfect for this.

The German cuisine also facilitated our practically dine-and-dash approach.  You could order courses, but entrees generally came with vegetable sides so it was easy to do a one and done approach.  And I know German food is knocked as all meat and potatoes, but we had a good bit of variety.  I enjoyed a crusted fish with herbed risotto.  I had roast chicken at the Hofbrauhaus.  James really enjoyed his sides of red cabbage.  My wienerschnitzel at Andechser am Dom was accompanied by arugula and potato salad.  It was tasty, filling, and fast.

An overheard on our trip nicely sums up the different eating philosophies.  At a restaurant in Munich, James heard a waitress seating two Italian tourists.  The waitress told them they could have the table, but for only one hour.  It took awhile for the couple to understand and when they did, they were incredulous.  “Non è possibile,” said the wife with round, disbelieving eyes. 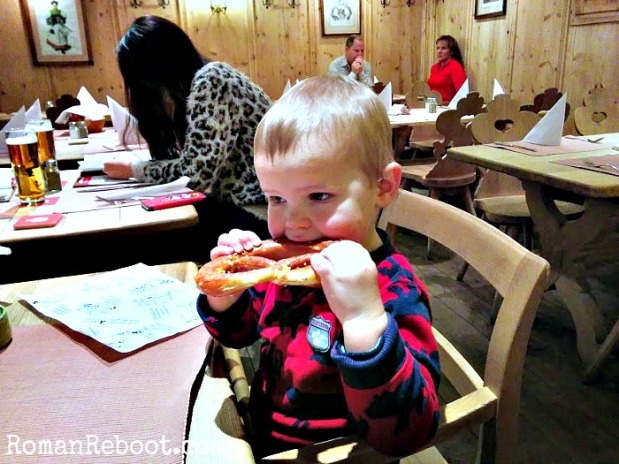 I’m not a hater.  Italians make some darn tasty food.  But they do it on their own time.  I’m hoping restaurants will be easier with the kids in a few years.  For now, even though I couldn’t find a changing table in any of the dining establishments we visited in Munich, having restaurants that are open earlier makes a huge difference.

Hofbrauhaus, Platzl 9, 80331 – We didn’t sit in the main beer hall, but had little trouble finding a table in a side room not too far from the action.  No high chairs, but we didn’t ask.

Andechser am Dom, Weinstraße 7, 80333 – Smaller place, did have a high chair.  I have to give mad props to our waitress.  They were packed for dinner, but she let us use a table before another reserved party got there.

Spatenhaus an der Oper, Residenzstraße 12, 80333 – We got two high chairs!  And they brought coloring stuff for Henry.

7 thoughts on “Which country is more kid friendly for travel? Hint: it rhymes with Shermany”