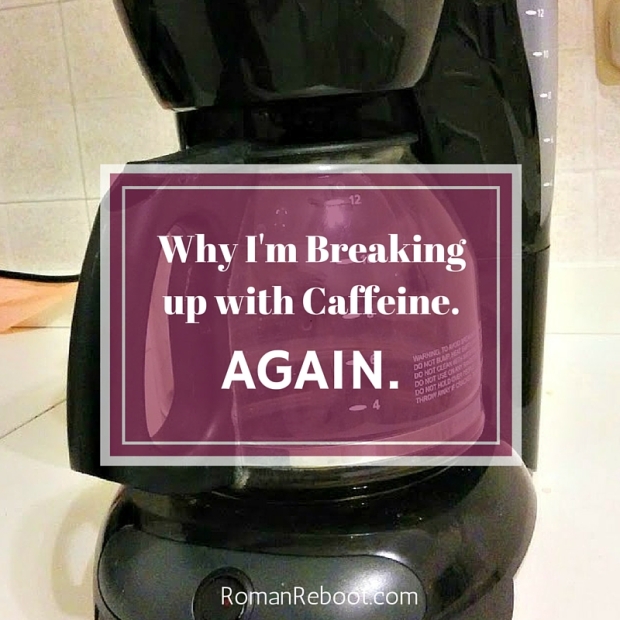 Once upon a time–wow, all the way back in 2007–I stopped drinking caffeine.  Cold turkey.  No coffee.  No soda.  (Yes, still chocolate.  Let’s not be crazy.)

The decision to stop was one born of both frustration and laziness.  I was frustrated that, come every day around 2:30 pm, I could NOT keep my eyes open.  My 20 oz soda was the only thing pulling me through.  The laziness was because James was out of town, and I didn’t feel like making morning coffee on my own.

I remembered a Great Uncle telling me that he gained a lot of energy by giving up his afternoon Coke.  I figured I had nothing to lose.  My consumption wasn’t off the chart ridiculous.  We’re probably talking about 3-4 caffeinated beverages daily.  But I didn’t like that I NEEDED it.  I don’t like being dependent on things.  I’m not saying coffee is evil; it seems to have many benefits.  I’m just saying that it wasn’t working for me.

My detox strategy was simple.  It wasn’t even really a strategy so much as a collision of circumstances.  It was summer.  I was interning (unpaid) for a judge.  I was taking Property to catch up to my peers who started law school full-time.  The property exam was looming, my judge had more interns than computers, and they decided to give the unpaid intern/computer occupant the week off to study.  Also, as I mentioned, James was out of town.

I spent the week waking up without an alarm clock, cramming everything I could about adverse possession, and not consuming caffeine.

I’m proud to say that I walked away with an “A” on my exam and free of my caffeine addiction.

Turns out my Great Uncle was right.  I can’t say I was never tired again, but my afternoon slump got MUCH better.

Over the years, I had the occasional beverage.  I sometimes drank decaf coffee, sometimes none at all.  But I drank things because I wanted to.  Not because I needed to.

When we first arrived, I had the rare cappuccino.  Because it was only every few weeks, I didn’t bother asking for decaf.

Later, I switched to espresso, but I started having more.  I became more confident about going into cafes on my own.  I became more social and met up with friends in cafes.  Every couple of weeks became once a week became a couple of times a week.  Throw on top of that the coffee I was drinking at home on cold winter mornings.  You can see where this is going.

And that, my friends, is where I draw my own personal line.  I had a choice to make.  Be OK with needing coffee.  Or be OK with cutting it out.

You can guess what I chose.

As if I was looking for another sign, Henry broke my French press when he was “helping” with the dishes last night.  I GET IT, Universe!

I don’t know if this will be a cold turkey quit like last time, but I know that it is time.

If you see me this week and run the other direction, I won’t blame you in the slightest.  I don’t really want to be around me this week.  But hopefully after a week or so I’ll be back to having my coffee not because I need to, but simply because I want to.

What’s your caffeination strategy these days?  Ever decided to change it up?

3 thoughts on “Why I’m Breaking up with Caffeine. Again.”