Modern Mrs. Darcy posted recently(ish) about family traditions.  I really like traditions.  Growing up we always had waffles on Christmas and always opened stockings first.  I want to try ALL the new things, but I like having some steady standbys to return to.

Since the kids are young, we are still in the process of building our own family traditions.  This was for Henry’s recent third (!!!) birthday.  Maybe he didn’t remember last year, but I did, and I liked deepening the grooves on our past practices.

This year was really fun because it was the first year he really got it.  So much in fact that I think he thinks ALL of September is his birthday and he assumes it is birthday-related whenever I mention a party.  No dice, kid.

We kicked off the day with a longstanding family tradition of waking up the birthday boy by running in playing Birthday by the Beatles.  (James has “grown accustomed” to being startled awake in this way on his own special day.)  We threw balloons at Henry and danced.  He was definitely excited, but was like “what is happening??”  But in a good and smiley way.

We took pictures under the family birthday banner.  (Henry was anti-pants.)

Henry opened his presents.  We got him a watercolor dragon paint book and an ancient Rome sticker book.  I wrapped up his next size shoes and presented them.  They look like mini-Lightening McQueens so he was pretty stoked.  (I ordered his new fall clothes with Marvel logos and was going to wrap them, but they didn’t arrive until later.)  He also received a car track, a sweet Gamecock shirt that is his new favorite, a Gamecock-colored Volkswagen Beetle, an amazing atlas, and a Ferrari car.  (Thanks so much family and friends!) 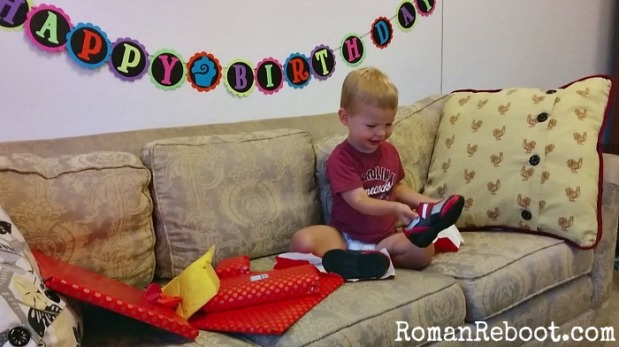 One of my favorite moments was when he opened the Matchbox cars “from Mac.”  Although it took him a few moments to understand that this was a present from Mac and not TO Mac, he immediately wanted his brother to help him open it.  Awwww.  And then when he saw the cars, he started picking out one for his brother to play with.  AWWW.  I melted.

For breakfast, we did green eggs just like last year.  This year we added pancakes with sprinkles.  I try to cultivate an “it’s your birthday, you can do whatever you want” attitude, but I still made him finish the eggs before pancakes.  Some habits die hard.

After breakfast, we met with a friend and decided to work on some candidates for birthday traditions.  I decided we would do ALL the things at Villa Borghese we don’t normally get to do.

The boys rode the rides.

We terrorized everyone on a quad bike.  Henry can reach the bell and, man, he really wants to ding that thing.  But he would always ask–which is nice–and he would always try to fabricate an excuse–which is interesting.  “Mommy, those people are going to run into us.  I should ding the bell.”  If you tried to get him to ring it when he wouldn’t be annoying everyone in our path, he wouldn’t do it.  That would be ridiculous.  He knows what bells are for.

In possibly Henry’s favorite part of the day, we got balloons.  Henry selected Dusty for himself and Lightening McQueen for his brother.  This was a first and will definitely not become a regular thing.  I loved seeing his face light up, but getting that sucker home was trying to say the least.  If I hadn’t had a friend along, that balloon may have been “accidentally” released.  Henry insisted on walking, wouldn’t rein in the string, and ended up whacking every person and tree we passed.  Good times. 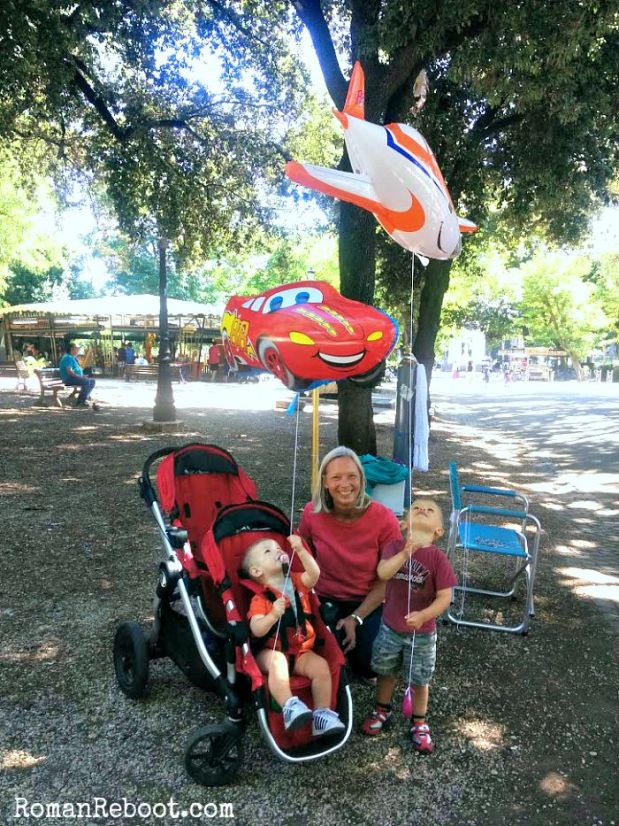 On our (what felt like an hour) walk home, we stopped for Henry’s fave, suppli.  (Roman arancini)  Then we stopped for gelato.  At this point, we were in danger of crossing into the too-much-birthday territory, but luckily, we made it home for naps unscathed.

After nap, we headed down to the playground to meet up with friends.  We sang happy birthday and enjoyed cupcakes and snacks that Henry himself selected on a recent grocery store run.  Mac had like four cupcakes.

For dinner, I made pasta, something I rarely do.  Henry actually didn’t eat much, but his brother was LOVING all the birthday decadence.

I meant to have a family movie night where we watched videos of the birthday boy, but I forgot.  Henry watched Mater’s Tall Tales which I’m sure he preferred anyway. 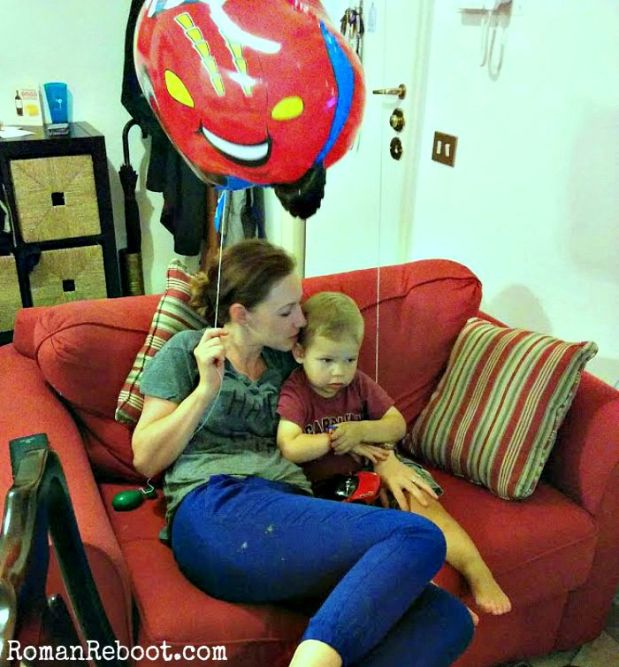 And that was our very full day.  Some old traditions and some new.  Speaking of new, I’m going to start asking the boys birthday questions.  Here is Henry’s first round of responses:

And another newish tradition, the birthday letter:

You are three.  Whoa.  Clearly, I did NOT spend much time with three year olds prior to this.  You right now are what I thought a five year old was like.  I guess at age five you will be bigger than me and doing adult things like debating the merits of capital gains.  With your father, of course.  I won’t be talking about that nonsense.

The things you say constantly surprise and delight me.  We have a ways to go, but you are really breaking ground on talking about ideas instead of things and thinking of new off-the-wall stuff.  I couldn’t be prouder.  Sometimes you, apropos of nothing, ask me “how is your day going?”  My jaw drops, and then I tell you.  Sometimes you KEEP tackling your brother for no reason.  Well, maybe you have a reason, but for no GOOD reason, let’s say.  This is a less endearing trait.

This is an area where I feel like I’m failing you.  It is like we have flipped a switch, and your highs are higher but your lows are lower.  There are times when you just WON’T STOP doing violence to something, and we just don’t seem to be able to communicate.  I’m trying to respond with compassion and love and tolerance.  But it is hard.  Nobody likes being hit.  You are having some epic meltdowns, and I’m floundering because you are scary strong and this all seems new to me.  I mean, you tantrummed before, of course, but you have recently turned it up to 11.  I’m trying some new stuff.  We’re working on it.

My offensive plan is to schedule in some awesome Henry + one parent time for you.  Mac gets plenty of solo time.  Like when you go to school.  Or when he wakes up before you EVERY SINGLE morning and nap.  You deserve some special Henry time.  We’re working on it.

Speaking of school, you are still generally going three mornings a week.  Recently we did an extended day where you stayed through lunch and nap.  It went well.  School always seems to go well once you get there, but the actual getting you there has been tough lately.  I’m not sure what is going on.  In the heat of the moment, you just scream that you don’t want to go to school.  In the calm moments, you’ll tell me heartstring-tugging things like you just want to spend time with me.  This is tough.  I try to shake it off because you seem to enjoy it every time.  Once you actually get there.  Your school was a good solution for us before, but we will be reevaluating for the future.  We’re working on it.

You are SUPER into superheroes lately.  I don’t mind this except then violence seeps in when I didn’t expect it.  “I’m Spiderman, and I’m going to punch you in the face!”  Wait, what??  Fortunately, we can discuss how Spiderman generally uses his powers for good and definitely does things like eating his vegetables.  But it is new and weird.  I just got you three longsleeved shirts with Batman, Captain America, and Spiderman.  I’m pretty sure you don’t need anything else, because why would you ever want to wear another shirt now?  (For reference, you are doing 4T shirts.  You just moved up to 3T pants.  We have to tighten the waists and roll the bottoms, but your brother needs your 2T pants now so  . . . )

You are growing even though your zeal for all food has abated.  It’s weird.  Sometimes you won’t eat the food yourself, but you will chew and swallow if it is put in your mouth.  I never know whether to let you eat what you want or encourage you to eat more.  Suppli (fried risotto cheese balls) are still a fave of yours.  You are greatly enjoying the new cereal with milk on the weekends regime.  Your true favorite food probably remains whatever snack the other kid is holding.  Omigoodness, you are a snack mooch.  One of these days I’m going to bring celery sticks and see if the whole another-kids-food-is-always-better principle extends this far.  Just you wait.

You still loooove the TV.  You probably only watch a show every other day, or every three days.  But you definitely ask to watch something every day.  Usually Mater.   (Ya’ll, I just looked up spelling.  Did you know that Larry the Cable Guy is the voice of Mater?  Learn something new every day.)  I’m trying to be a little more relaxed on programming.  Wild Kratts for everyone!  You just still turn into a raging Henry monster when it is time to turn it off.  Generally not worth it.

You do enjoy cheering on the Gamecocks at football.  Or any football seemingly.  Which you don’t understand isn’t constantly playing.  Some day I’m going to tell you stories about how we watched sweet movies on VHS that my Mom taped when they were on after our bedtime and we could fastforward through the commercials without even looking and you will look at me like I’m an ancient, medieval dinosaur.   And you will be right, but I’m just saying that not all TV is available to you all the time even if it really feels like it is.

So this is three.  Great when it is good.  Kind of banana pants when it isn’t.  If you could work on cultivating some inner reserves of peace when things don’t go your way, I would be most appreciative.  And if you could get on board with the potty-training train that is barreling your way, that would also be super fantastic.