Henry and I made a pomander.  One of his new Christmas books talks about making one, and I thought it could be a fun craft to do together.  I was wrong.  Stabbing those cloves in was hard for me.  There was no way Henry could do it.  Martha’s it is not, but at least it looked a little better than my usual Pinterest fails.

This pomander is now in the rubbish. I don’t really get how you are supposed to keep this in your sock drawer and not have it mold.

We visited an exhibition on Nativity Scenes near Piazza del Popolo.   There were sets from around the world, which reminded me of the (free!) display at the Mormon Temple outside DC, elaborate sets made in Italy, which seemed to feature Jesus nestled in your local town amongst the trattorias, and sets made of unconventional materials, which included sets made from shoe horns and various types of pasta.  It was pretty impressive.  Only mildly extremely crowded.  Henry enjoyed it.  Sadly, no pictures allowed.

Our building had a very fun and awesome holiday house crawl.  I love that it feels like college here sometimes when you could just go see people without leaving the building.  On the crawl, I discovered the “Dirty Girl Scout” which is now one of my new favorite cocktails.  I’m a sucker for peppermint at the holidays.  Or any other time of year really.

I used the opportunity to bust out an awesome gift from my MIL, her own blazer from her own pre-kids era.  This now vintage blazer is so well-made and beautiful that it really deserves more play, but I at least make sure it sees the light for the holidays.  And I promise that if I continue to take mirror selfies, I will find a better pose.  (Yup, still wearing that shirt.)

We heard that Romans don’t really “do Christmas.”  This seemed strange considering the location, and I thought it was unfair.  Granted, we didn’t see as many lights as in Germany, but most shops put out festive garlands and lights. 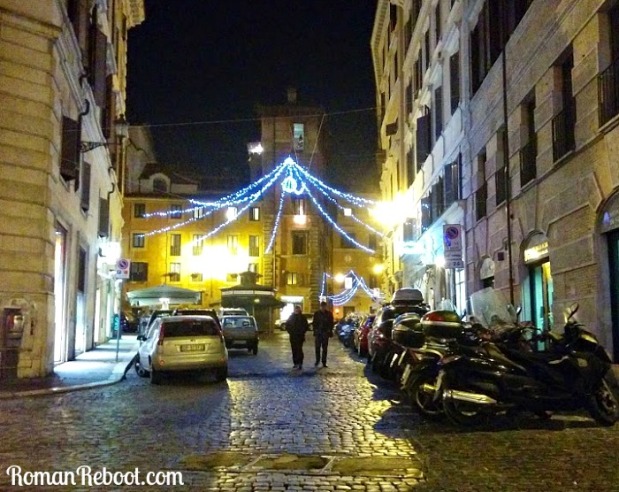 Downtown had tons of awesome lights.  Via del Corso was lined with lights showing flag from every country, which I’m told is to celebrate the upcoming World’s Fair in Milan.  The tree at Piazza Venezia was ridic. 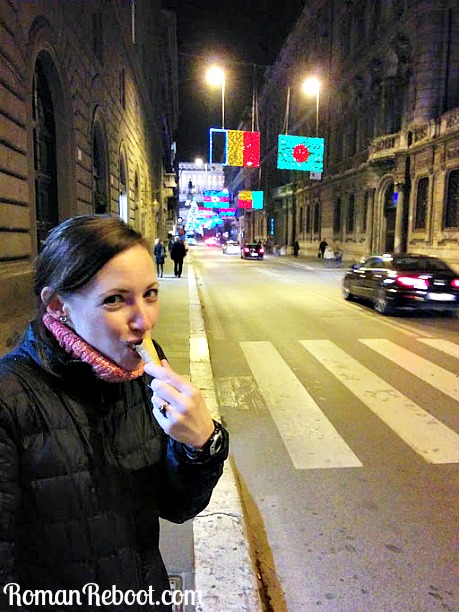 James bet I wouldn’t put this photo on the internets. It’s like he doesn’t even know me.

The grocery stores also filled up with lots of holiday treats.  There were literally stacks of panettone and pandoro, panettone’s more buttery cousin.  Henry and I had a very Italian moment when we skipped down the street with our carby goodness.

They were pretty good.  They were even better as french toast.  That’s right, we just can’t stop french toasting leftovers, but I can’t claim credit for the idea this time.

We were very excited to receive a Christmas dinner invitation from some new friends.  Not cooking was great.  Enjoying delicious food with friends was even better.  James made this cake.  It is easily the best cake he has ever made in his entire life.  I won the no limit hold ’em tournament, a family tradition of theirs.  (This is another tradition I can definitely get behind.)

We had our first visitors!  Our dear dear friends, who are also the boys’ godparents, came for three jam-packed days.  We rode bikes at Borghese–which will almost certainly be more enjoyable when the cold wind isn’t blowing in your face, ate pasta, and enjoyed catching up.  It was very special to see them and it means a lot that they made the trip.

The boys have some exciting new toys.  Henry is in car heaven.  Mac has new things to chew on, which is pretty much his jam.  We have some very wonderful family and friends, who not only sent things halfway across the world but wrapped them as well!  I’m beyond touched and can’t thank them enough.

That’s right. BE jealous of our Christmas jammies.

It was a full and fun festive season.  How about you?  I hope you enjoyed all of your holidays!

11 thoughts on “Our Christmas in Italy”