Earlier this summer, we did a lot of trips.  We went to Puglia.  We did overnights at Lake Bracciano, a castle outside of Montepulciano, and over in Umbria for our trip to Cortona and Assisi.  We did day trips to Turin and Ostia Antica and plenty of other places that I’m forgetting.  We recovered in July and hit the States in August.  Now I’m gearing up for another travel bonanza.

Anywho, I’ve been realizing that these trips had some stand-out-travel-all-stars that made them pretty awesome.

Nights weren’t perfect.  Naps didn’t always happen.  But sleep was mostly continuous throughout the night, even when we were all sleeping in the same room.  This was huge because uninterrupted sleep was a long time coming for Mr. Mac.  This was also huge because I don’t think I could tourist it up–you know as much as we are able–if we were getting up a few times a night.  So now I’ve jinxed myself for the next trip, but yay sleep!

I can’t seem to find pouches here.  I finally found some yogurt-based pouches, but these need refrigeration which sort of defeats the purpose of pouches IMHO.

So I finally ordered some on the internets.  YESSSSS.  #pouchlife

But pouches have made their way back, and I’ll tell you why.  Instead of being a meal replacement, they are more of an accoutrement.  The food at the restaurant is taking awhile and the kids are losing it?   Pouch.  All the sandwich places within a 3 mile radius of that park are somehow closed?  Pouch.  I don’t want 50 spare raisins or cracker crumbs everywhere?  Pouch to the rescue.

Also, when we travel, we tend to eat all the pasta and bread that we don’t do at home.  This means I’m not usually hating the kids having a serving of vegetables, even if they are in puree form.

Pouches are definitely a sometimes food.  Only used for outings and sparingly at that.  But when they are needed, they are CLUTCH.

3) Half Board at Agriturismi

You know what is the worst thing ever, she says without exaggerating whatsoever.  Staying in a hotel with the adorable weirdos.  OK, that isn’t the worst part, but eating THREE MEALS A DAY in the real world with them, as is usually necessitated by hotels, is pretty awful.

AirBNB fixes some of these issues.  We can keep our shenanigans occasionally private.  But then we have to shop for food.  And cook it.  I could do it.  I could.  But I already spend half my waking hours thinking about food (zero exageration here, I swear).  After a full day of sightseeing and ostensibly being “on vacation,” whipping up a meal is one of the last things I want to do.

What is this funny word?  An agriturismo is basically a working farm that is also a B&B.  (Rick Steves tells you more.)

We have stayed at a few now, and they are ggrrrrreat.  Many have bigger rooms or suite options.  Many have breakfast, and I’ve been specifically seeking out ones that can do breakfast and dinner.  (We’ve learned our lesson from the ornament incident.)

Because they are farms, there is generally plenty of space to run around.  My kids can go bother farm animals.  Some even have playgrounds and pools.

You do have to go outside of towns to get to them, but I think this is OK if you can do dinner there.  Someone else does the cooking and nobody has to worry about having a glass of wine with dinner?  Sign me up!

I crushed hard on our agriturismo in Puglia, Bioagriturismo Serragambetta.  Our room wasn’t fancy, but it was airy and clean.  The food situation was AMAZING.  They have a large communal dining room lined with baskets of toys.  This meant that while I enjoyed an amazing, fresh-from-the-farm, four course meal–complete with local wine, natch–my kids could eat and then run around and play and NOT drive me insane. 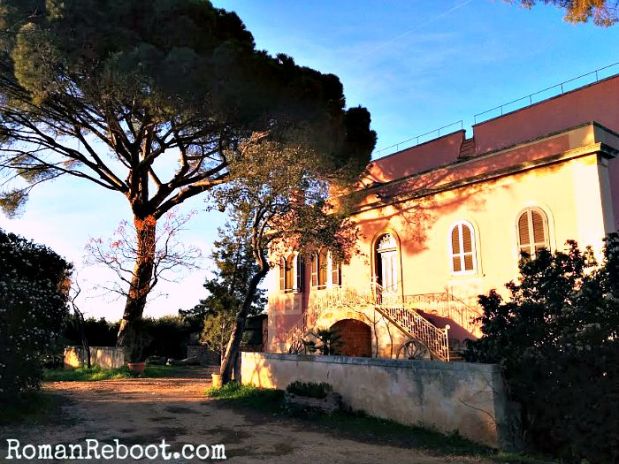 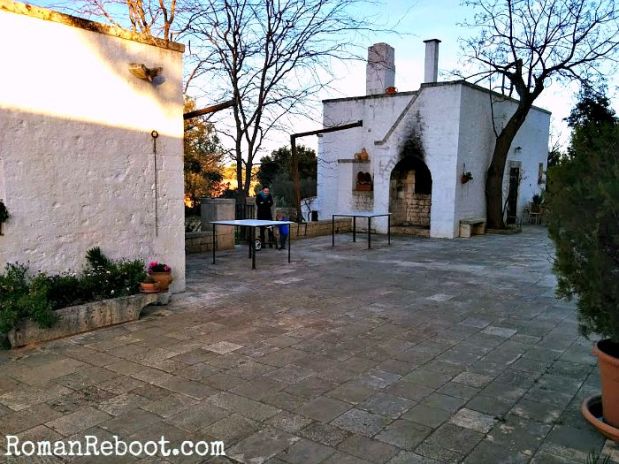 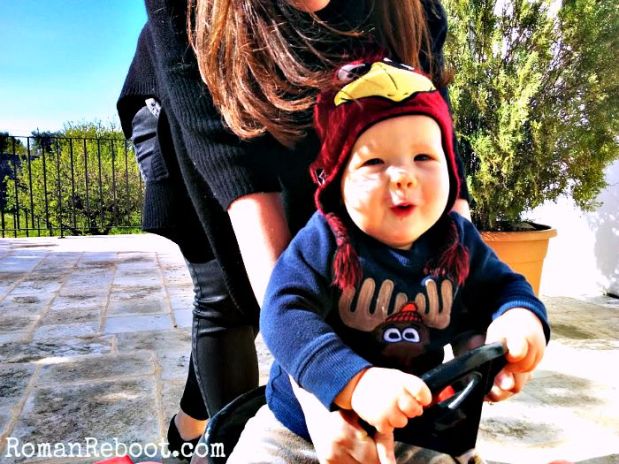 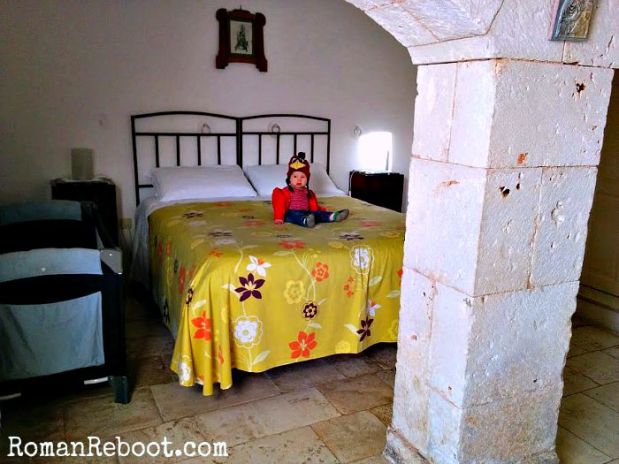 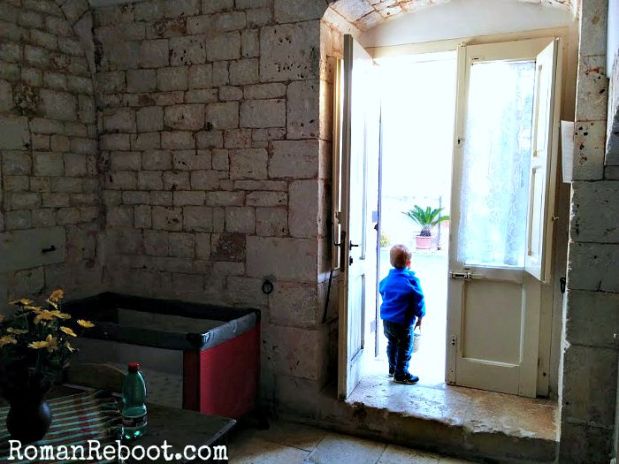 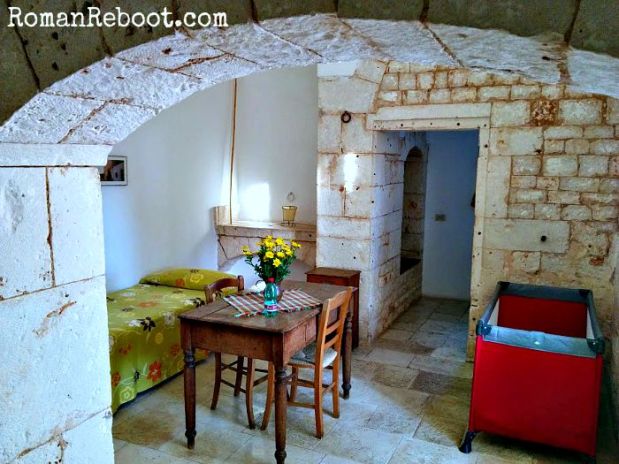 We lucked up again with Agriturismo Marilena la Casella on our trip to Umbria.  This was a different experience.  Quieter.  But very very good.  The pool was a little cold for us, but we logged some hours down at the soccer field and terrorizing the farm animals.  I learned how to cook gnocchi with Marilena, and we enjoyed my new skill for a tasty lunch on the terrace outside our apartment.

Here, we were the only guests eating dinner in the evenings.  Let me tell you.  As a parent of two adorable weirdos, it was such a TREAT to enjoy meals cooked by someone else in our own private dining room.  I wasn’t constantly freaking out about the kids’ noise levels.  They could move around if they needed.  And, again, the food was fresh-picked and fantastic. 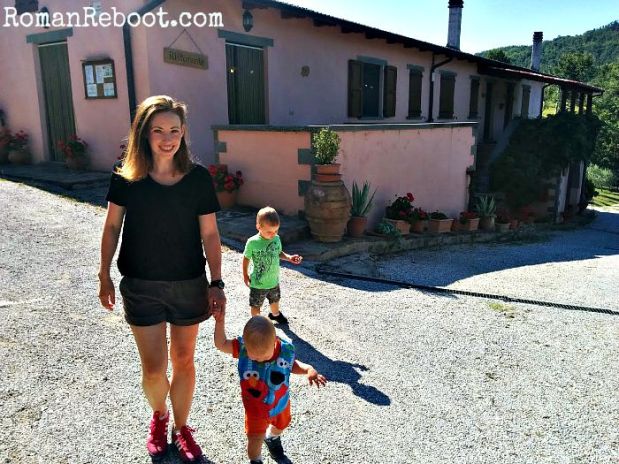 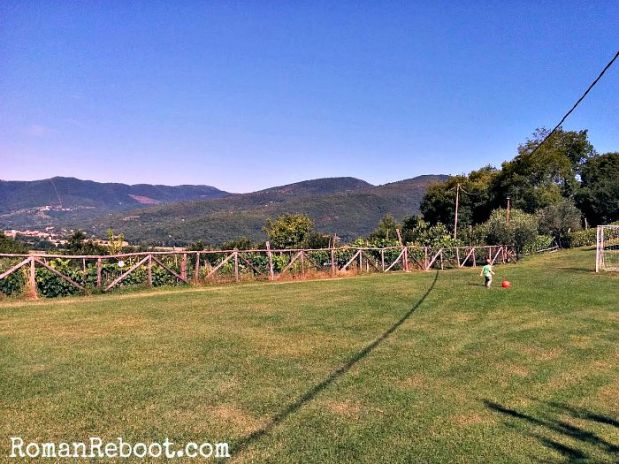 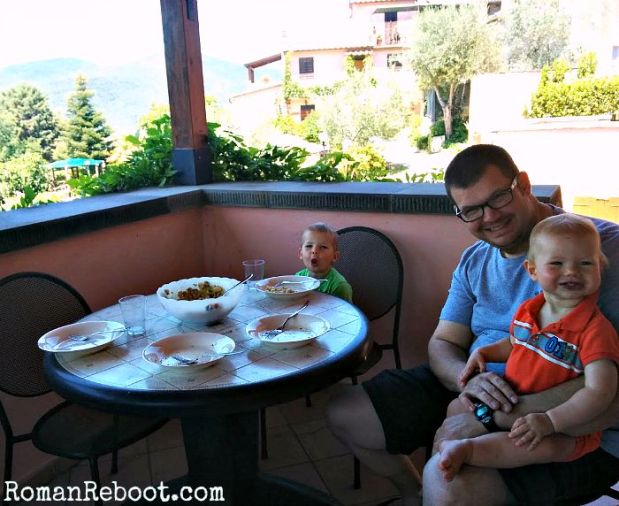 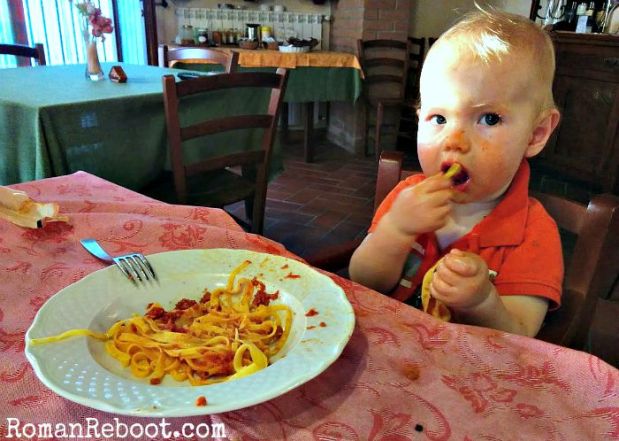 On a more recent trip to Lucca and Pisa, we stayed at Azienda Agricola Biologica Nico.   I’m getting a little misty-eyed writing about it.  It was such a great experience.

Yes, you have to bump down dirt roads to get there.  Yes, the place is terraced on the side of a mountain so there is a bit of a hike up.  All WORTH IT.

Federico and Elena have three young daughters, and our visit felt more like staying with dear relatives than anything else.  But BETTER because these dear relatives served amazing food and wine while you just sat and enjoyed the view.  We ate our meals at the covered table outside, wearing jackets because of the slight hint of fall in the air.  Elena makes the best coffee I think I’ve had in Italy.   The meals served were vegetarian, but I couldn’t have cared less because THIS is how vegetables are supposed to taste.  Tender grilled zucchini and eggplant.  Spicy arugula dressed in olive oil.  Bowls of fresh beans.  I could go on.  Let’s just say that James is not anti-vegetable, but I’ve never seen him get this many seconds and thirds on veggies.

The boys enjoyed the playground and baskets of toys.  Oh, and did I mention the KITTENS??  These three tiny balls of fluff were a highlight of the visit.  Henry still requests to return to the “cat house.”  I can’t blame him.  I could have cuddled these guys all day.  The boys did.  Like I blinked and Mac is one-handing a kitten.  I predicted this would all end poorly, but these are the most patient cats I’ve ever met.  I think Mac only got one tentative swipe, and he definitely deserved it.  (His “petting” looks like trying to unscrew the head off the poor cat.)

Have you guys heard of the WWOOF program?   Worldwide Opportunities on Organic Farms?  Yeah, neither had I.  But we met someone volunteering there.  Basically for participating farms all over the world you work six hours a day in exchange for room and board.  I may have to look into this someday.  Could be a budget-friendly way to travel and learn some interesting stuff. 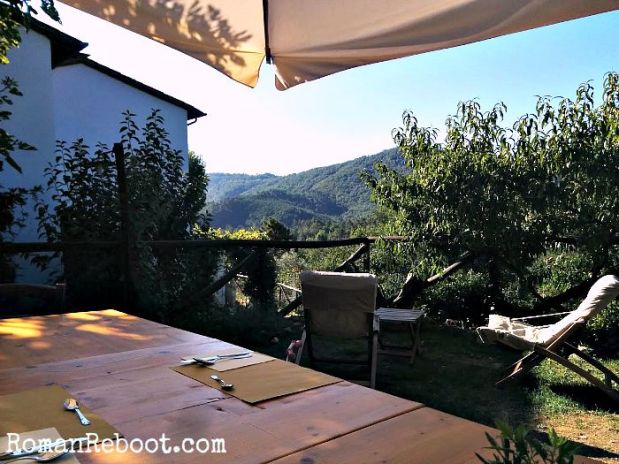 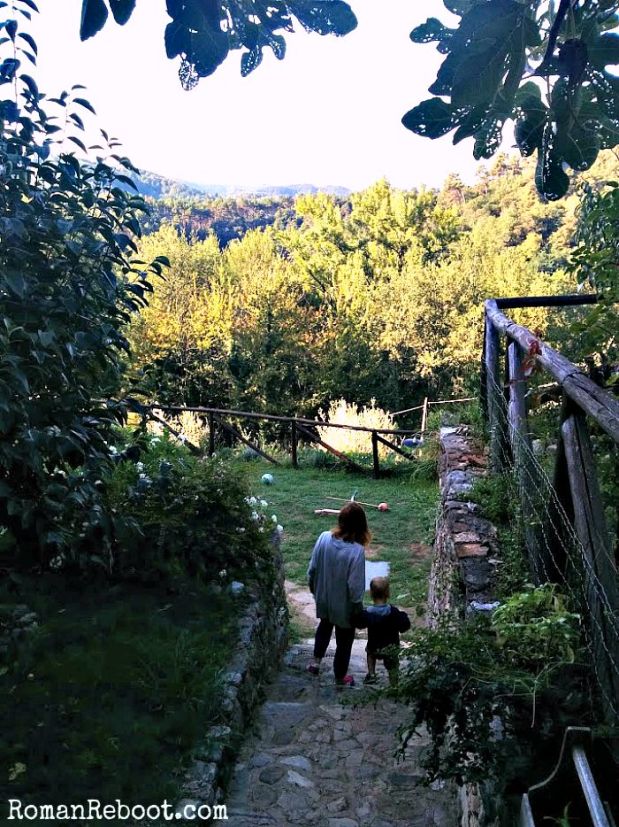 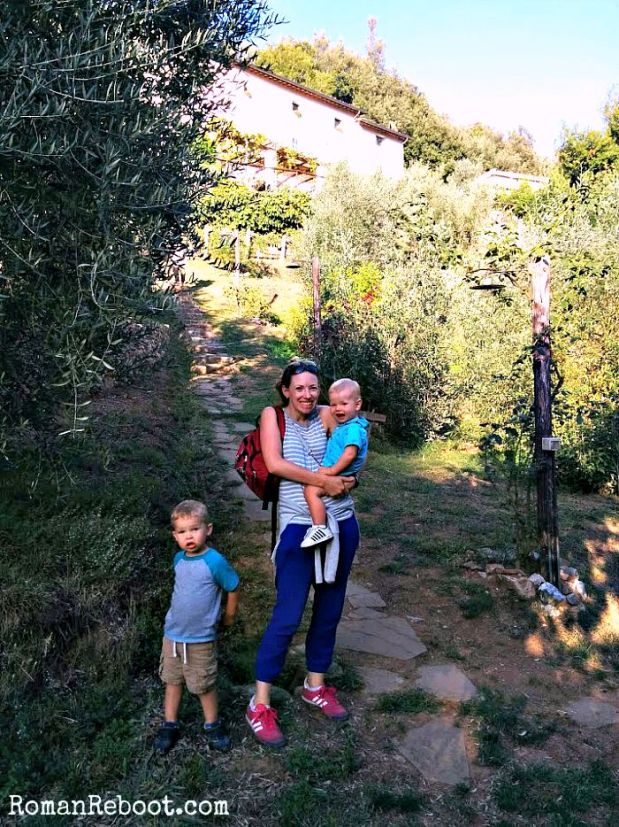 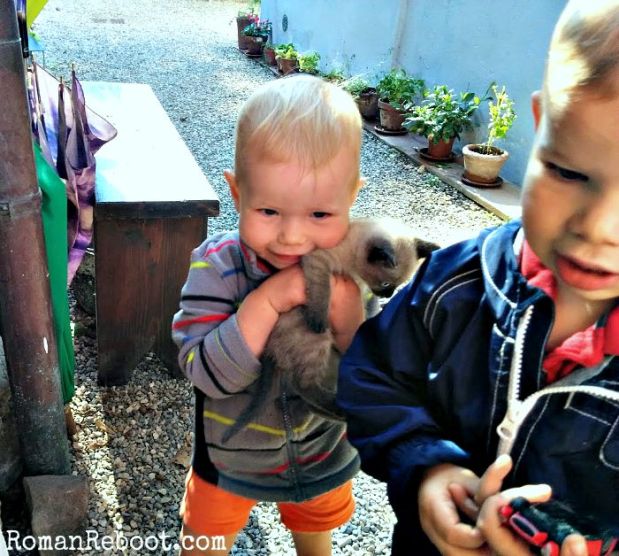 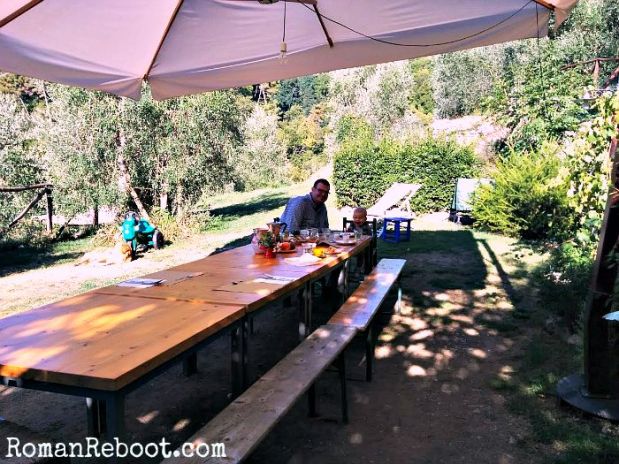 I should mention that we also stayed in agriturismi at Volterra and Lake Bracciano.  They were great, but we didn’t do half board there.  (In Volterra, the owners have a restaurant in town and at Il Castore they have a small cafe down by the lake.)

I’m sure we’ll return to city dwelling some day, but for now, the love affair with agriturismi is far from over.  They just seem to fit our pace of life at the moment.  I’ve generally found ours at Agriturismo.it.  If anyone has a recommendation, I’d love to hear it!